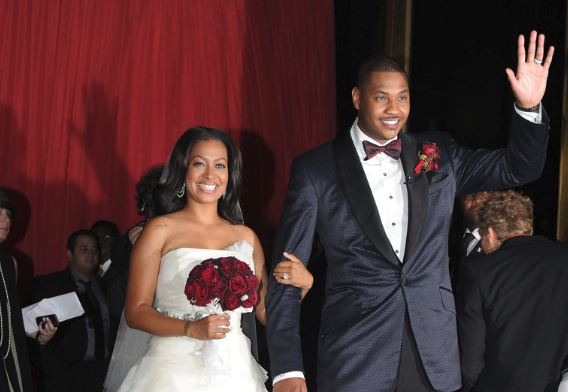 Splitsville: Is the marriage over for La La & Carmelo Anthony?

If you haven’t heard by now, the marriage for La La Anthony and Carmelo Anthony, #7 for the New York Knicks, appears to be over after 7 years after allegations surfaced of him getting a dancer pregnant.

TMZ reported Tuesday from multiple sources, “The other woman often works at a gentleman club in NYC, and we’re told she’s claiming to be 6 and a half months with Mello’s child.”

The reports also say that the marriage has been rocky for a while and there’s virtually zero chance of a reconciliation.

This isn’t the first time we’ve heard cheating rumors about The Anthonys or about how men in the NBA are, for that matter. According to Page Six, one source said, “Mello justified his cheating with the tagline, ‘she’s married I’m not.’ His attitude is that all professional athletes and many of them do. La La has put up with a lot She knew it was going on, but I guess this time she had enough.”

Stating the obvious here, but it is common knowledge that – for the most part – anyone who becomes involved with a professional athlete have many trials to deal with, but it’s no excuse for SOME of their “bad behavior.”

Would you be able to date a man who is in the lime light and is constantly having women throw themselves at him?  What would make a woman stay? Love perhaps? Money perhaps? Inquiring minds want to know…. We hope the Anthony family can work it out, but if not, La La, we’ve got your back girl!