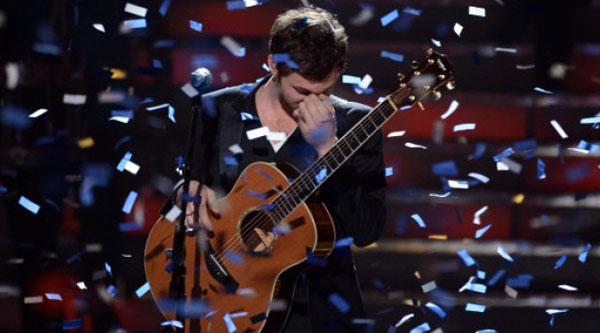 Many people knew from the moment we saw him – eyes closed, body jerking and feet tapping – as he sang a bluesy rendition of “Thriller” during his audition, Phillip Phillips would not only go all the way to the finals, but would be the next American Idol for Season 11.

Even though we all fell in love with powerhouse performers like Jessica Sanchez and Joshua Ledet and Skylar Laine, there was just something about Phillip that kept those who wouldn’t normally vote (like me) dialing in each week.

Congratulations to the quiet former pawn shop worker who—despite being dubbed a Dave Matthews clone – made our jaws dropped as he made songs like Usher’s “You Got It Bad,” all his own!

Take a look as Phillip sings what may just be his first single, “Home,” before he gets overcome with tears and leaves the stage to fall into his loving family’s arms.
Congratulations to the man who wooed us from Georgia to Hollywood. I have a feeling he won’t be one of the “fallen Idols” – Phillip Phillips has a real future in this industry!

Check out a recap of his performance, courtesy of AmericanIdol.com.