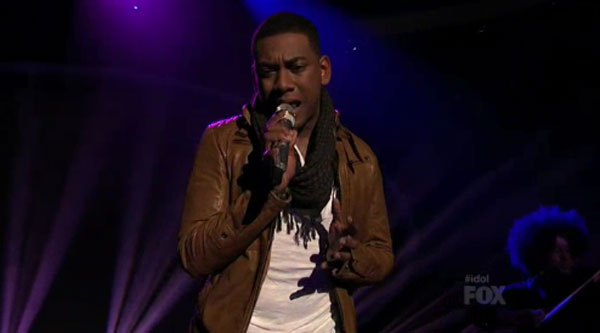 American Idol’s Joshua Ledet is ‘Ready for Love’ and the big time!

“I am ready for love.  Why are you hiding from me? I’d quickly give my freedom to be held in your captivity,” Joshua Ledet started as the melodically oozed the lyrics of  the India Arie song.

The audience was captivated after that. When it was over, all three American Idol judges jumped to their feet and joined the audience with thunderous applause.

“I don’t even know what to say anymore, man, I am so speechless.” Randy Jackson said.  “All I can say is you are so spot on….Guys, anybody trying to figure out how to become a singer, what to do on this show, look at Season 11 of Idol.”

“I don’t even know what to say to you anymore,” Jennifer Lopez followed.  “That was so transcendent.”

“When I hear you sing I am sent to another place which is what a song is supposed to do,” Tyler said.  “I hope the label finds you a bunch of good songs and you’re off to the moon.”

Don’t take their words for it, watch his amazing performance, courtesy of AmericanIdol.com.