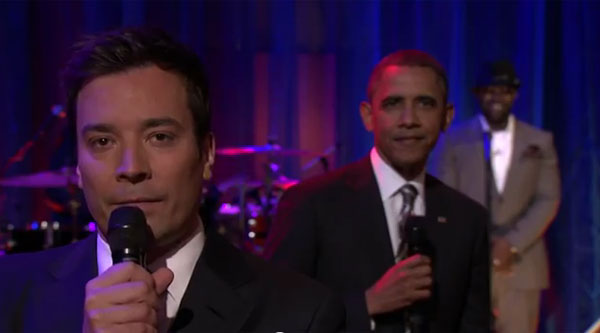 Say what you want about him, but President Barack Obama remains as cool as ever.  In fact, he elevated his cool on the “Late Night with Jimmy Fallon” show as he “slow jammed” the news.

“That’s right, I want to slow jam this news, and I’m not the only one,” Fallon said.

Open curtains – the president strolls out – the wild crowd leaps to its feet with a thunderous ovation.

“I’m President Barack Obama and I, too, want to slow jam the news,” the Commander-in-Chief, or as Fallon called him, “The Preezy of the United Steezy,” said.

“Hit it presidential style,” Fallon yelled and the Roots kicked up a slow jam beat.

Obama—with a stern look on his face – talked about student loans and interest rates while Fallon followed with a “Barry White-esque” comedic spin.

“Now is not the time to make school more expensive for our young people,” Obama said.

“Ohhh yeah, you should listen to the president,” Fallon chimed in.

Love it or hate it, Obama has the ability to connect with young voters and sometimes, you have to let your hair down a bit.

Watch the hilarious clip of the skit, courtesy of Youtube.