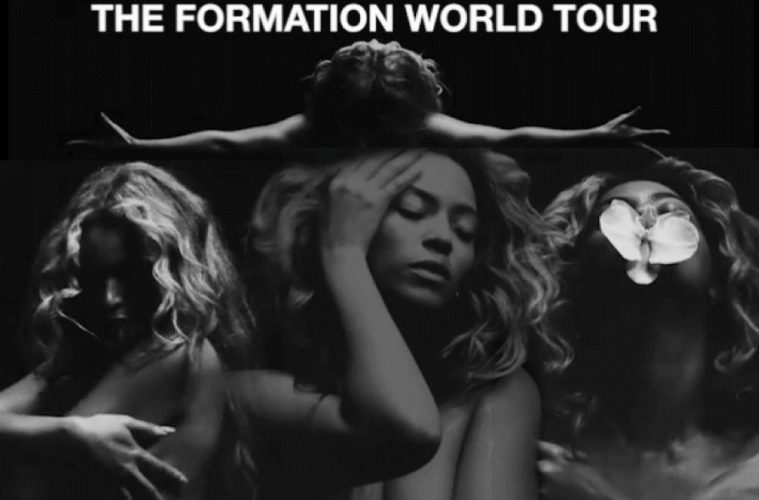 VIDEO: Queen Bey ARRIVED in Houston and she “came to SLAY B*TCH!”

Beyoncé shut down NRG stadium in early May for the premiere of her Formation World Tour when she arrived back to her hometown, Houston Texas!

The “6 Inch” singer caused many alarming side eyes — and eyebrow raises — when she unfolded her new visual album titled “Lemonade” on HBO.  And honey, when we say that album is JUICY! “Oh yes! You best believe it!”

Her album was the calling for all black women who wrote their love letters in silence, as it covered the grueling rumors of cheating between Beyonce and her hubby for the past two years.

In the visual, Beyonce featured a diverse representation of Black women in all tones, shapes and sizes, rocking everything from small afros, to cornrows, to big curly locks. She also featured the mothers of Black males who were killed due to police brutality or other senseless violence, including the mothers of Trayvon Martin and Michael Brown, Lezley McSpadden and Sybrina Fulton.

“I tried to change, closed my mouth more, tried to be softer, prettier, less awake. Fasted for 60 days, wore white, abstained from mirrors, abstained from sex, slowly did not speak another word… I grew thickened skin on my feet I bathed in bleach and plugged my menses with pages from the Holy book, but still inside me, coiled deep, was the need to know…are you cheating on me?” Lead by Somali-British poet, Warsan Shire, who wrote the commentary with Beyoncé’s voice-over. The album followed through stages of intuition, denial, anger forgiveness, hope and reconciliation.

“He better call Becky with the good hair,” sent the Hive into shock as they started up a firestorm questioning social media with questions of who exactly is Becky and where can we find her? Cause we all know, the Hive doesn’t play that!

While we may not know who she is, Beyoncé ended her album with forgiveness and showing that she is moving past the pain, and so should others in their personal lives with love being its own cure. However, Jay better get it together because “if you try this sh*t again, you gon’ lose yo wife!”

Now if you’re still waiting for the concert, be aware of some spoilers!

[Check out our video capturing a little of the H-Town crowd with our homage to Queen Bey!]

Dj Khaled opened the show welcoming Houston into the building, starting with a 90’s Biggie Smalls anthem playing throughout the stadium. This quickly transitioned into a “back-in-the-gap” reunion when Slim Thug and Paul Wall graced the stage performing H-Town’s greatest hit “Still Tippin.”

Starting her show with “Formation,” she also performed “Sorry,” “Countdown,” “Baby Boy” and “Me, Myself and I” as she stated, “This song is about the most important relationship you have in life…the relationship with yourself.”

She even went on to perform her song “Daddy Lessons” that eventually channeled her inner Michael Jackson with a “Dangerous” dance piece after “Flawless” and “Feeling Myself” going into her tribute to the legendary Prince.

During her performance of “Flawless,” NewsWithAttitude caught a cute video of Blue Ivy and Jay Z playing at the audio booth with Dj Khaled right before ending her show. She also performed “Love Drought” and “All Night” before taking the ultimate climate of her show with “Freedom.”

Well, Beyoncé…YOU have officially snatched our edges, grew them back and gave us life!

If you missed the Formation concert, no worries because the Queen will return in September for her second concert. Tickets are now on sale at Ticketmaster!