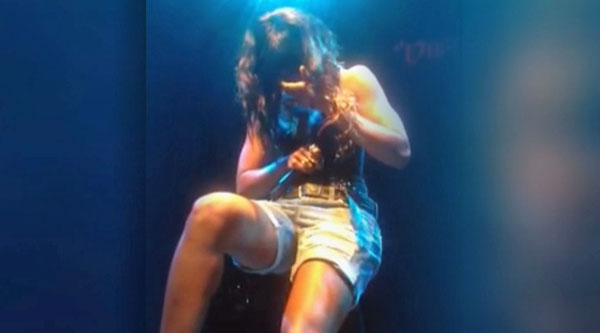 Kelly Rowland breaks down while singing about domestic violence, jealousy

Kelly was singing her new song, “Dirty Laundry,” in DC when she became overcome with emotion.  The song talks about her domestic violence issues with an unidentified boyfriend and her jealousy about the success of her BFF, Beyonce.  It took her a minute, but after some chants from the crowd and a moment to exhale, the Houston diva went on with the show….Looking lovely, as usual.

Here is an excerpt of the lyrics, and yes, it would be enough to make anyone break down.  Kudos to her for being so open! (But some fans are questioning the authenticity of said breakdown, judging by the comments.

Check out the Youtube video that has gone viral, uploaded by mikenasty25.

While my sister was on stage, killing it like a motherf-cker

Bird in a cage, you would never know what I was dealing with

Went out separate ways, but I was happy she was killing it

Bittersweet, she was up, I was down

No lie, I feel good for her, but what do I do now?

Off the record, I was going through some bullshit

Post-survivor, she on fire, who wanna hear my bullshit?

Meanwhile, this nigga putting his hands on me

When you’re soaked in tears for years, it never airs out

When you make pain look this good it never wears out

And it’s almost been a decade

I’m behind them black shades

Roll up like it’s all good, right up out that escalade

Kinda lucky, I was in her shadow

Phone call from my sister, “what’s the matter?”

I’m on the kitchen floor – he took the keys

I was mad at everybody, I mean everybody

Yeah, her, her, her her everybody

Five years later, I got my shit down pat

Think I had it good, and they don’t know how bad

Fooled everybody, except myself

Soaking in this hurt, bathing in the dirt

When you’re soaked in tears for years, it never airs out

When you make pain look this good it never wears out

So here I am in the spin cycle

Nobody can know this

And I was trapped in his house, lyin’ to my mama

Thought it could get no worse as we maximize the drama

Started to call them people on him

He hittin the window like it was me, until it shattered

He pulled me out, he said, “Don’t nobody love you but me

Not your mama, not your daddy and especially not Bey”

He turned me against my sister

Beyonce to get personal in upcoming HBO documentary

People’s ‘Most Beautiful Woman’ in 2012: Beyonce