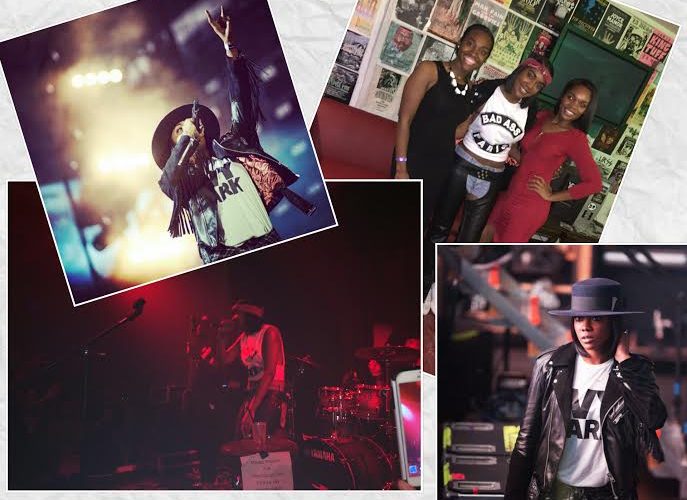 “Trill” music, crawfish and a Queen Bey connection? Whatever it was, it had to be “Going Down in H-Town.”  Well, you’re right and it was, and a select group of music lovers got a front row seat to the beat, and we were honored to be among the up-close-and-personal crew.

We got our share of “Trill Feels” as we had the pleasure of not only talking to the all-around creative and swaggy Ingrid, who has been signed by Beyonce to Parkwood/Columbia Entertainment, but seeing her in one of her most comfortable elements— performing her original music from her new project. Paying homage to her fans and her roots, the Third Ward native held an album release party in downtown Houston Friday featuring all you can eat mud bugs (yep, it’s a Southern thang), sounds played by Kyle Woods, lots of dancing and a powerful performance by Ingrid herself.

Although Ingrid is known for being a songwriter for Beyoncé (she wrote Love Drought), she is truly in a league of her own. From her intriguing lyrics to her distinctive style, it is hard to believe that Ingrid once considered herself to be the “awkward girl.” The sweet, down-to-Earth rapper chatted with News With Attitude about who she is, her experience living in Brooklyn for five years and how she started writing music.

As a songwriter, Ingrid feels that the true power of songwriting lies within one being able to interpret lyrics for themselves. She revealed that “the takeaway should be that people can listen to songs and apply them to how they feel as opposed to what they think they should be listening to.”

She also revealed that when she wrote Love Drought, Beyoncé didn’t know what she was talking about.

“She’s never asked me… probably, hopefully she won’t ask me, but at the end of the day, it connected to her, and that’s what makes her so special, because she’s able to listen to songs from an angle instead of saying, ‘Hmmm, I wonder what’s going on in Ingrid’s life?’” she said.

Ingrid has the gift of allowing people to have freedom listening to her lyrics while encouraging creatives to make music that gives listeners that same freedom.

With a Casio keyboard, Ingrid started writing music at age 11 and started rapping professionally at 13, but as she grew up, she nurtured that talent by deciding to move to New York from her home in Houston.

“I think that sometimes changing your environment is such a simple thing in some ways, but it’s a drastic thing that can really help,” she said.

She also said New York motivated her to live for herself and figure things out on her own.

“I think that will make anybody’s skin thick,” she said, referring to the drastic, but much needed, transition.

When she hit the stage, we then saw the chilled, laid-back Ingrid transform into a beast as she commanded the crowd instantaneously. She had the entire audience vibing and hitting the Southside to new songs Double Pedigree, F.A.D. and Coming Dine. This queen represented “The H” as if she was so proud to be home. Her music evoked nostalgic vibes mixed with a new school feel, and it made N.W.A. excited to be in the room to witness her hard work and creativity come to life. Her music embodies stories of love, life and embracing her natural power, confidence and talent. It definitely has a flavor that’s stamped with Third Ward, Texas, yet it’s easily relatable to people from all walks of life. Fans can be sure to hear collabs with Kirko Bangz, Devin The Dude, and Sevyn Streeter on this project. From the looks of Twitter and other social media outlets, Trill Feels is getting the response that Ingrid wanted. Needless to say, we are grateful for Ingrid gracing us with this one!

Ingrid’s new project, Trill Feels, is out today! If you want to stay up-to-date with her music and heavily anticipated/continued success, follow her on Instagram and Twitter @ingrid, or be sure to visit her website at damningrid.com.