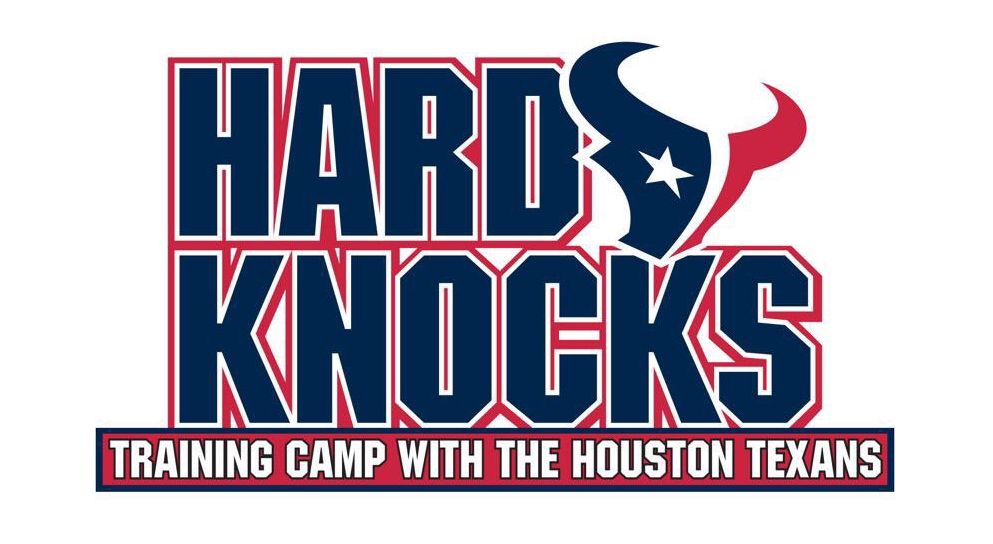 HBO Sports, NFL Films and the Houston Texans team up for an all-access look at what it takes to make it in the National Football League when HARD KNOCKS: TRAINING CAMP WITH THE HOUSTON TEXANS debuts in August. The first sports-based reality series – and one of the fastest-turnaround programs on TV – kicks off its five-episode tenth season TUESDAY, AUG. 11 (10:00-11:00 p.m. ET/PT), exclusively on HBO. Other hour-long episodes of the 12-time Sports Emmy® Award-winning series debut subsequent Tuesdays at the same time, culminating in the Sept. 8 season finale.

“We are thrilled that the tenth edition of HARD KNOCKS will spotlight a team in a division that we have not featured previously on HBO,” says Ken Hershman, president, HBO Sports. “It’s exciting to feature a team, a franchise and a city for the first time on HARD KNOCKS. We are grateful to Texans chairman Bob McNair, general manager Rick Smith, coach Bill O’Brien and the entire organization for agreeing to participate and look forward to what we expect to be one of the most compelling and interesting seasons in HARD KNOCKS history. The series has become a summertime destination for TV viewers, and we can’t wait for the premiere on August 11.”

“We want to thank Bob McNair, Rick Smith, Bill O’Brien and the entire Houston Texans’ organization for the trust they have in NFL Films by allowing us unprecedented access into their training camp,” says Howard Katz, COO of NFL Films and NFL senior vice president of broadcasting. “We are looking forward to highlighting this team comprised of star players, free-agent newcomers and hopeful rookies as they come together to try to ascend to the top of the AFC South. We are excited to work with both the Texans and HBO Sports to give fans an inside look into the game they love.”

The cinema verité series will focus on the daily lives and routines of players and coaches as the Houston Texans, who play in the hard-nosed AFC South, conduct the franchise’s 14th training camp and prepare for the 2015 NFL season. HARD KNOCKS: TRAINING CAMP WITH THE HOUSTON TEXANS will chronicle second-year head coach Bill O’Brien and an intriguing mix of high-profile veterans, emerging stars, free agents and rookie hopefuls throughout training camp and the four-game preseason schedule. Each week, players will experience drills, instruction, meetings and fun, while striving to prove they have what it takes to make the team and leave their mark on the NFL. The Texans are a team on the rise, with O’Brien improving the team’s record from 2-14 to 9-7 in his first season at the helm.

“We are thrilled to partner with HBO and NFL Films to give fans unprecedented access to our team and organization,” says Texans founder, chairman and CEO Robert C. McNair. “The HARD KNOCKS documentaries do a tremendous job of displaying how an NFL team prepare for the upcoming season. We look forward to showcasing the Houston Texans to a worldwide audience.”

A 30-person NFL Films crew will be at the Texans’ training camp at team headquarters in Houston, shooting more than 1,500 hours of footage over the course of the series. Camera and sound crews will have unencumbered access to the players’ and coaches’ meeting rooms, training rooms, living quarters and practice fields.

“This is an opportunity to provide a behind-the-scenes look at our team as we prepare for the 2015 season,” says Rick Smith, the Texans’ executive vice president of football operations and general manager. “Fans will get a chance to see the great competition that takes place day-in and day-out on the practice field, as well as get to know all the unique personalities on our roster.”

Four summers ago HARD KNOCKS moved its premiere night to Tuesday and the results have been a resounding success. The five-part 2014 series on the NFC South Atlanta Falcons averaged more than 3.6 million viewers per episode, an increase from the show’s 2013 performance. No other sports reality series can match the critical acclaim, awards and audience numbers posted by the HARD KNOCKS franchise.

Each of the last five teams featured on HARD KNOCKS has improved its won-loss record in the regular season immediately following the training camp presentation.

TIME called the show “riveting,” while NFL.com hailed the series as “undoubtedly the greatest football program in the history of the television medium.” Business Week observed, “As a workplace drama, it ranks among the best on television,” and New York’s Daily News termed it “the gold standard of sports reality programming.” ESPNW wrote, “The return of the NFL season also means the return of one of the best shows on television, ‘Hard Knocks.’ This rare look at how any given moment can be the end of a season or even a career.” Grantland.com observed, “Hard Knocks is when it really feels like we’re getting football back in our lives.”

HARD KNOCKS: TRAINING CAMP WITH THE HOUSTON TEXANS is narrated by Liev Schreiber.