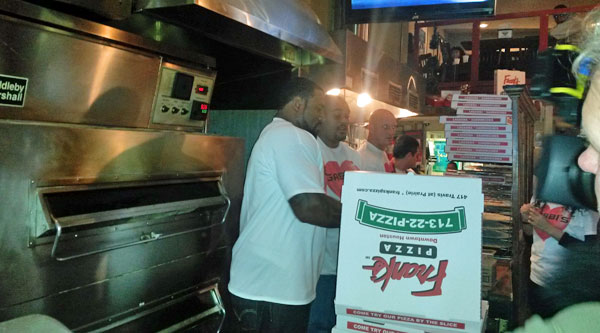 HOUSTON — Some Houston Texans got their hands dirty off the field Monday, December 23 to make sure as many homeless people as they could serve could enjoy a piping hot meal.

The players loaded the pizzas into their SUVs, then hit the streets. The group also made a special stop during their route to Open Door Mission, 5801 Harrisburg, to serve the shelter pizza for dinnertime. The idea was a collaboration of Gabbi’s Heart Foundation, The Wade Smith Foundation and Frank’s Pizza.

We just want to help people, no matter who you are, you just want to know that someone cares,” said Gabrielle Piagiotti of Gabbi’s Heart Foundation. Their goal for the holiday season was helping  others by sharing.

“When you are in a fortunate position to be able to give back, it’s a blessing. It’s just a blessing to be a blessing and I do my best to live by it,” Wade Smith said.

According to the Coalition for the Homeless, Houston is the leading city in Texas with the most homeless people. A 2011 Coalition study states nearly 9,000 people in the Houston area are homeless, with nearly 4,000 of them not in shelters. The chance of a hot meal for many homeless people does not happen very often, especially if they are not part of a shelter.

The aroma of Frank’s Pizza has moved through downtown Houston for decades. The pizza joint is known for its hand-tossed specialties and 3 a.m. closing time. On the weekends you can find the post- party crowds, in-town celebrities and several people seated in at the cozy tables against the wall. Several blocks down from Frank’s, homeless people line the street each and every day. This time, instead of wondering where their next meal would come, they received a slice of hot pizza from some Texans with a big heart.