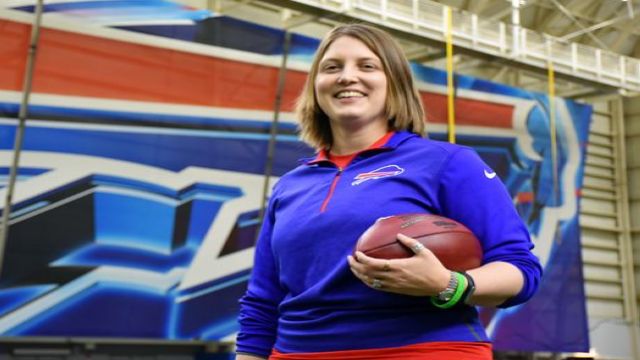 For the first time in history, the NFL has its first full-time female coach. The Buffalo Bills promoted Kathryn Smith as a special-teams quality control coach. She will assist special-teams coordinator Danny Crossman and his assistant Eric Smith.

Smith is well-known within the Bills staff and in the NFL. She spent last season working as an administrative assistant for the team’s assistance coaches on Rex Ryan’s staff. Before that, she worked for the New York Jets for 12 years, including the final six under Ryan when he was the Jets’ head coach.

“She certainly deserves this promotion based on her knowledge and strong commitment, just to name a couple of her outstanding qualities,” Ryan said. “She has proven that she’s ready for the next step, so I’m excited and proud for her with this opportunity.”

Smith replaces Michael Hamlin, who the Bills announced earlier this month would not return as special-teams quality control coach.

Bills offensive lineman Richie Incognito expressed his support for Smith in a tweet:

The Buffalo Bills continue to help pave the way for female coaches. This is not the first time the Bills broke the gender barrier. Linda Bogdan, in 1986, became he NFL’s first female scout, when she joined the team’s player personnel department.

Smith’s promotion is the latest step for women getting a chance to join the coaching position of North America’s professional spots.