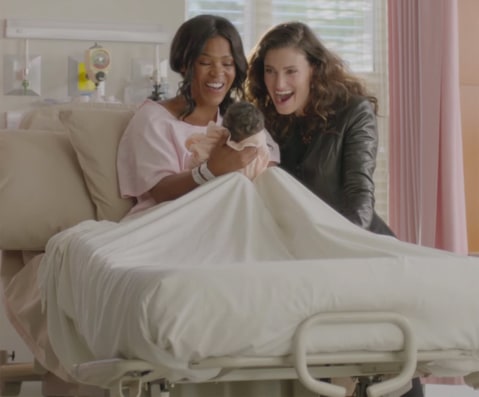 Lifetime is allowing all “Beaches” fans to relive the amazing, touching bond between best friends C.C. and Hillary, but in a different way with different actors. Originally played by Bette Midler and Barbara Hershey, Nia Long and Idina Menzel have a true task to make this another memorable tearjerker, however, we think they won’t disappoint!

The movie will still be similar to the original film, still focusing on the idea of C.C. achieving much success as a famous performer while Hillary deals with with an illness. In this new film, Hillary, played by Nia Long, is the daughter of a civil rights lawyer while C.C., played by Idina Menzel, is a vocalist trying to spread her wings in Los Angeles. No matter the distance or how much their lives have changed over the years, these best friends show us what it truly means to be there through thick and thin.

Although we are very excited to see this debut on Lifetime, we know without a doubt that when we hear “Wind Beneath My Wings,” the water works will soon begin!!!

Tune in to Lifetime on January 21 at 8/7 C. to watch the remake of this classic!