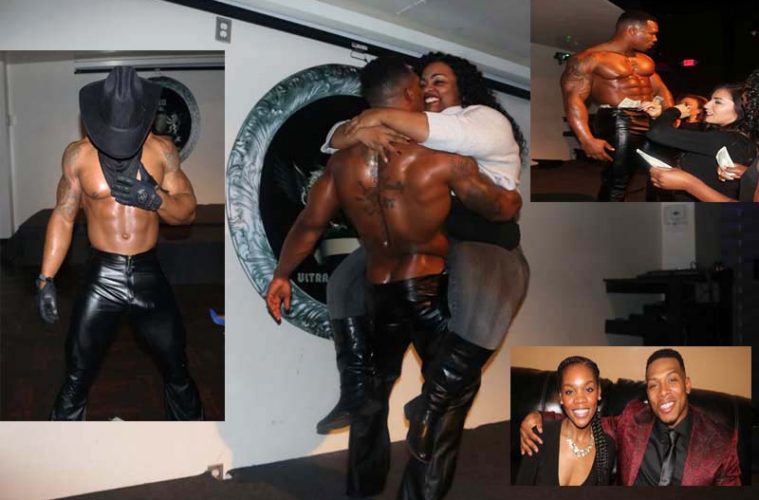 HOUSTON — Things got steamy Wednesday night as Dolce Ultra Lounge and Bistro hosted the stars of Vivica A. Fox’s new show, “Vivica’s Black Magic,” for its premiere on Lifetime TV Network! The new docu-series focuses on Fox’s idea to create an exotic urban male revue that is fluent in selling fantasies all across the nation. The men are bringing you diversity — and hotness — like you’ve never seen before.

News With Attitude had the PLEASURE of sitting with two of the shows stars and to get a sample of one of the dancer’s talents… WAIT FOR IT… Thank us later.

Heartthrob Darrin Henson, who also played Lem on Showtime’s “Soulfood,” is the show’s choreographer and director.

When asked how he became involved with the show, he told N.W.A., “Vivica and I are like sisters and brothers… I’ve never done reality before, and it was an opportunity to choreograph and take a show all the way to Vegas.”

Henson, an extremely talented and hard-working actor, was juggling multiple projects while working on this show. In the first episode, his busy work schedule led to a decision the male revue dancers had to make in his absence.

Henson was to entrust the fellas with his choreography in hopes that they could pull it off in front of Vivica’s home girls during the first episode, and the guys decided to change the routine up a bit.

At the viewing party held at Dolce, the audience got to see that despite some initial doubt from some of the guys, they were able to pull off the sexy — definitely not disappointing! But it’s not always a bed of roses in the world of testosterone. Henson warned us that as the docuseries goes on, the drama will begin to unfold.

NOW FOR THE DRUMROLL…

Along with Henson, Dolce’s owner Al Rucker,  brought a special treat for the ladies who came out to the lounge that night. One of the premiere eight “Black Magic” dancers, Michael “BOLO” Bolwaire, not only mixed and mingled with the ladies, but stripped down and showed everyone what he was working with!

Peep the woman in the postal uniform. LOL.

BOLO, short for “Be on the Look Out,” told N.W.A. that the best part about recording the series was having the opportunity to work with top-tier entertainers who have inspired him. When it came to the “Queen Vivica,” he made it clear that she is nothing short of a boss!

BOLO got started in the male entertainment industry with his older brother, Renegade, in his hometown of Cleveland, Ohio, and talked about how hard it was to build his brand.

“It wasn’t an overnight success,” he said. “I definitely worked and paid my dues to the game.”

Although the men carried a lot of ego in the house, as expected,  BOLO’s confidence allowed him to work through it all.

“I carry myself up on a platform and pedal stool,” he explained, and hey, we see why!

When asked what we should prepare our eyes (and ears) for on this new season, BOLO told us to make sure we are all tuned in on Lifetime every Wednesday to find out. No spoiler!

No worries, after watching him and the other men in action, eyes will be glued to Ms. Vivica’s men. Thanks for the “magic” ma’am!

Dolce offers plenty of things for all types of crowds every night of the week. For more information, reservations and tickets, check out dolcehouston.com. Dolce Ultra Lounge and Bistro is located at 18039 FM 529 Ste. A in Cypress, Texas!

Check out more photos from the show that night. Quite a viewing party, we must say! Click the first pic to start the slideshow…… and… you’re welcome!