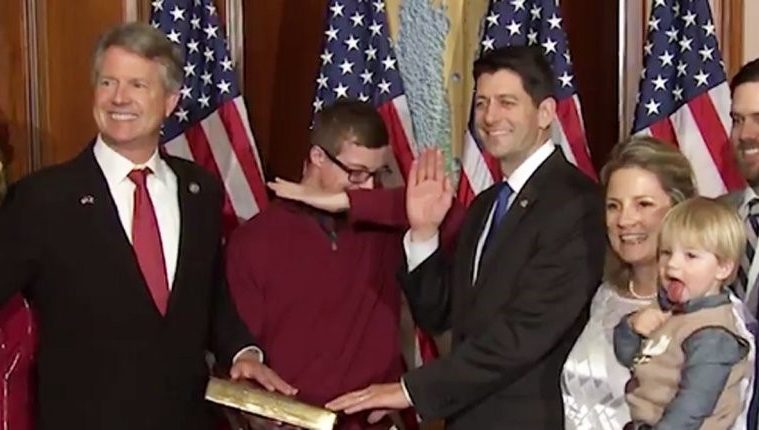 When a serious moment turns into a joke…this happens.

Dr. Roger Marshall was sworn into office Jan. 3 as the 115th Congressman. During the ceremony, traditional photos and video footage was taken. House Speaker Paul Ryan joined the Congressman and his family for a photo op.

In the photo, Marshall’s son is seen doing a popular dance pose called “dabbing,” a dance move that originated in Atlanta and became popular as a victory dance on the field by football player Cam Newton.

In a video posted on Twitter, Marshall and Ryan place their hand on a book. Marshall’s son is seen flashing a grin on his face and then goes in straight “dab” pose. Ryan is heard talking to the boy asking if he was alright.
“Do you want to put your hand down? Are you going to sneeze?” Ryan said.
The young boy finally gets himself together for the photo and all is clear.

House Speaker Paul Ryan had to stop a congressman’s son from dabbing during his father’s swearing-in https://t.co/LIm3r6rFzl pic.twitter.com/7jcHVomPtV

However later on social media, Marshall responded to a tweet by Ryan regarding Marshalls’ son’s “awkward” behavior, and informed the House Speaker his son is “grounded”.
“

Ryan responded and said, although he understands he is a young kid, Ryan still has no clue what “dabbing” is.

We’ll count this one as a funny harmless moment.