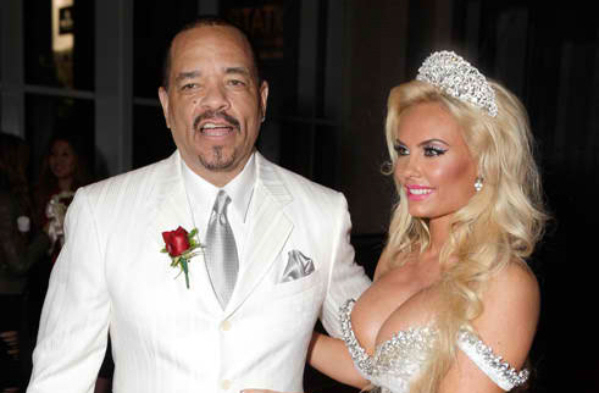 Every other week Hollywood gets a new “IT” couple and Tinseltown runs amok with the flashbulbs and merged couple names; TomKat (Tom Cruise and Katie Holmes) Bennifer (Ben Affleck and Jennifer Lopez) and Brangelina (Brad Pitt and Angelina Jolie), but before the bets can be placed in Vegas on how long these romances will last, you see “splitsville” headlines on your favorite gossip magazine or website.

Then sometimes you see a matchup that appears to be “unconventional,” yet you automatically get the feeling that no matter how “weird” it seems, something about it is right.

As with the case of Ice-T and CoCo, whose real names are Tracy Marrow and Nicole Austin.

The former self-professed “Original Gangsta” and definitely proven “Hustler Like No Other” who went from pimp, to rapper, to movie actor, to television actor (with major chops on a hit NBC show) and now reality TV star – renewed vows with his wife Coco, a swimsuit/ nude model who still wears some of the raciest outfits imaginable, at the W Hotel in Hollywood Friday night.

The couple said “I Do” again on their 10th wedding anniversary before a room full of friends, families and some of Hollywood’s most “colorful” personalities.

The pimp cups and cleavage were both running over all around the room, but none bigger than the woman of the hour.

Coco was a vision in white, in an extremely low-cut princess-styled wedding gown and Ice- T was decked out head to toe in “tight white” with a tasteful red rose on his lapel.

Snoop and the Bishop saluted Ice as one of the most successful pimps to take the entertainment industry by storm.

Ice-T and Coco definitely prove that any person, from any walk of life, from any background and/or race can fall – and remain – in love.

Recently Ice talked about his relationship with Coco, explaining how the two met and meshed together.

“I think whenever you meet somebody the first thing is physical attraction,” Ice –T told pr.com. “That’s the first thing you do, you look at somebody and picture: can you imagine being intimate with the person. But at that time in my life I wasn’t really ready for just another lustful adventure. I wanted something a little more. I was ready to slow up and I was trying to find a partner. Honestly, I thought she was too pretty to be, as you would say, domesticated. Like, can we fit at home or is this a girl who just wants to party? But she was like, “No, I’m ready. Let’s just go snuggle someplace and do home stuff.”

The model showed she was more than just a pretty, blonde bombshell with big boobs and an even bigger backside (or vice-versa); she was thoughtful, smart and down-to-earth.

Coco proved to Ice you should definitely not judge a book by its cover and we at Lip Service: News with Attitude are sure she will win us over as well.  We will definitely be watching the couple’s new reality show.