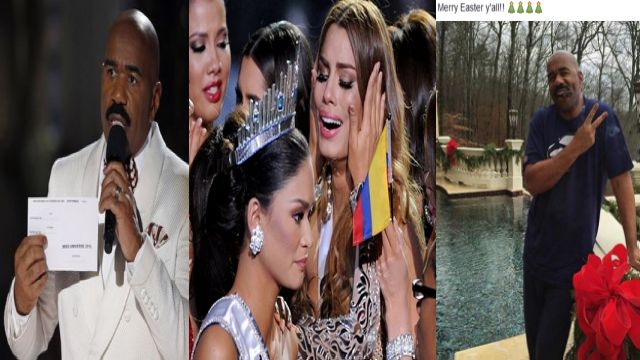 There are two things you must always be able to do in life, if you want to keep your sanity. The first is own up to your mistakes, and then, you must be able to laugh at yourself sometimes and move on. Steve Harvey, one of the original kings of comedy, did just that.

Social media went into a frenzy last Sunday after what appeared to be one of the biggest “no-no’s” in Miss America pageant history.

The comedian and actor hosted this year’s Miss Universe pageant live and made a mistake that was felt around the world, literally. When it was time to announce the winner, Harvey announced Miss Columbia as the winner, but she was actually the runner up.

After five mins of standing ovation and basking in “winner” bliss, Miss Columbia, Ariadna Gutierrez, was immediately caught off guard after she was already crowned and wearing the “Miss Universe” ribbon when the dreaded words came from Harvey’s mouth.

“Okay folks I have to apologize. The first runner up is Columbia. Miss Philippines please take your first walk as Miss Universe.”

The camera immediately panned to Miss Philippines, Pia Wurtzbach, as she stood there shocked and confused as to what just happened. Hesitant to walk back out on stage, the other pageant contestants signaled the beauty to go back out to claim her title.

More awkwardness ensued as Miss Philippines apprehensively walked back out on stage and stood next to the mistakenly announced winner.

Harvey immediately took blame attempting to control the situation, explaining to the confused audience on what had just happened.

“Let me just take control of this. This is exactly what’s on the card. I will take responsibility for this. It was my mistake, it was on the card. It was a horrible mistake,” he said.

Miss Columbia held her composure as she was de-crowned on stage. The beauty kept a smile on her face as the crown was placed on Miss Philippines.

Twitter wasted no time to “shade” the host after the epic fail creating the shadiest “memes.”

Having some sympathy for Steve Harvey after tonight. pic.twitter.com/jAEPwXHUEz

All though Steve Harvey made the biggest blunder of the year, we have to applaud him for owning up to his mistake live on national television, and he showed that he can also laugh at himself. The comedian posted his own little self-jab on his Facebook page.

Kudos to you Steve, life goes on and so does those checks. Yes, he will be back to host the pageant again next year. Contracts, dear!