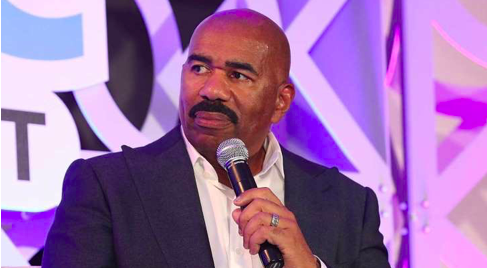 By: Nia X
Steve Harvey is under fire for comments he made on his talk show about Asian men.
During a segment on a self-help book called “How to Date White Women: A practical Guide for Asian Men, Harvey made jokes about the Asian community and even implied that women are not attracted to Asian men.
“Do you like Asian men? Then swiftly answered, “No, thank you.” He continued his spiel by saying: “You like Asian men? I don’t even like Chinese food, it don’t stay with you no time, I don’t eat what I can’t pronounce,” said Harvey.
The crowd was not feeling his jokes and Harvey proceeded to laugh hysterically at his own jokes.
The daytime talk show host is also dealing with a lawsuit accusing Harvey of allegedly going on a “racist” rant in a recording from 20 years ago.
According to a number of new court documents filed, Joseph Cooper the plaintiff in the case accused Harvey of urging his audience to “spit on white people” and “go assault old white women.”
Harvey claims Cooper is trying to extort him for money.
“Mr. Cooper has initiated a campaign to essentially extort me, coerce me and embarrass me as I started to build my entertainment career,” wrote Harvey in his own suit.
Harvey is set to appear before a judge Jan. 23.