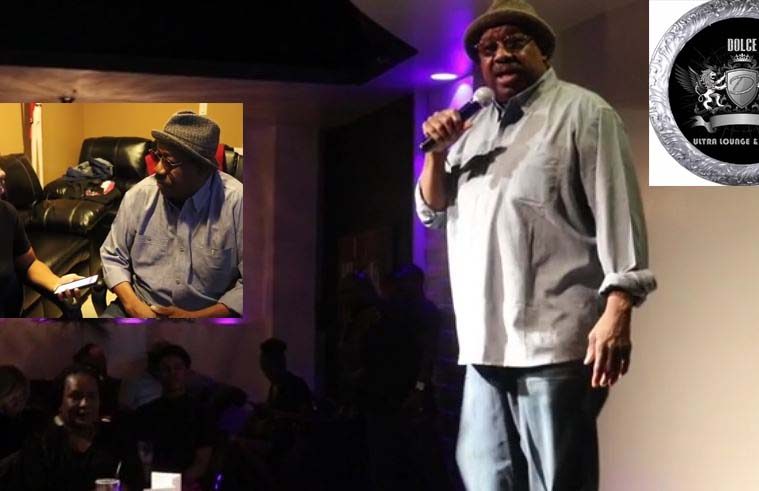 J. Anthony Brown wows sold out crowd at Dolce, says Tom Joyner Show was “best job I ever had”

HOUSTON — Everybody loves a little knee-slapping, tear-jerking, hearty laughter every now and then. Fortunately for us all, Dolce Ultra Lounge & Bistro gives all of that every Wednesday through their dope comedy stand-ups and performances. This Wednesday night’s experience was full of good food, great drinks and a laid-back ambiance, that is, until comic legend J. Anthony Brown took center stage. Let’s just say it was extremely…. raw and uncut!

Dolce is the perfect spot for the grown and sexy crowd, delivering ideal quality through the creation of signature drinks and delicious food selections, such as their seasoned-to-perfection King Zing wings and chili crab deviled eggs. These menu favorites had us saying, “Wait, this is just too good to be true!”

Brown took us all the way off the edge, cracking us up about everything from his missed appearance in Houston, to sex, and other off-the-wall subjects that made us all laugh hysterically. The humor was absurd and exactly what the crowd needed after a typically long, stressful day at work.

N.W.A. was excited to sit down with the old school funny man, who talked about his departure from the Tom Joyner Morning Show, his favorite new school comedians, and how he is able to stay so relevant over the years.

“You just watch the news and you hang around younger people,” Brown said.

He also gave a lot of credit to his internet radio show, saying that everyone is much younger than him and, when you learn to use gadgets and outlets that appeal to the younger audience, it’s actually pretty easy to stay on the radar.

“I got people my age that can’t even text. We all know somebody like that,” he said.

When it comes to his decades-long run on the Tom Joyner Morning Show, he said, “It was a decision I made on my own. I didn’t get fired, I quit, so I mean once you have the power to leave something, you have a little power about the decisions you make. I just knew I wasn’t gonna’ stay there any longer. I thought 20 years was enough.”

Even though the undeniable chemistry between Brown, Joyner and Sybil has finally come to an end on-air, he still expresses his love and gratitude for having that irreplaceable platform for two decades.

“It was a great job. It was the best job I ever had, it’s the longest place I’d stayed anywhere. I hadn’t even been married 20 years, and I’ve been married three times… that job was golden. It was great,” he said.

After leaving that position, Brown said he had no idea what he was going to do, so he went back to his roots.

“I knew I could do comedy. I knew I could go to clubs and do stand-up. It wasn’t that I would starve,” he said. And judging by the audience at Dolce, he definitely hasn’t lost his touch.

When it comes to favorite new school comedians, he has a few! Brown told N.W.A. that people like Melanie Comacho, Mike Epps, D.L. Hughley, Katt Williams, Lavell Crawford and Sommore are some of his top picks!

While passionately discussing his love for comedy, Brown revealed that his favorite thing about the industry is “the ability to take something that’s in the news that people can relate to and make them laugh.”

And believe it or not, “I still get nervous whenever I go on stage,” he said. “The ability to take something and go on stage and make people laugh is… it’s like golden.”

To see more top comics like Brown, check out Laughter and Liberations every Wednesday at Dolce Ultra Lounge and Bistro, located at 18039 FM 529 Ste. A in Cypress, Texas, just a short ride from Downtown Houston.

For more information, reservations and tickets, check out dolcehouston.com.

Check out more highlights from the evening!