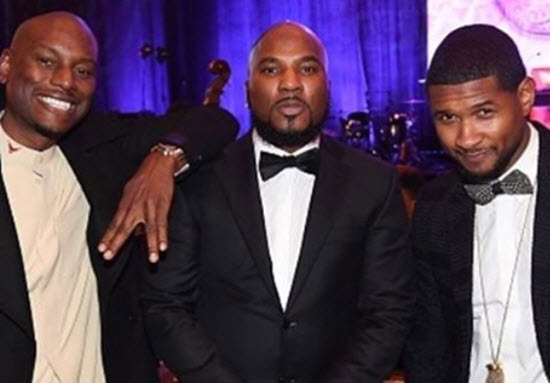 We already love them for their impeccable artistry, but now we can say we love them for supporting our very own HBCUs! Mainstream entertainers Tyrese Gibson, Usher Raymond, Future and Young Jeezy have each recently donated $25,000 to The United Negro College Fund while at the 33rd annual UNCF Atlanta Mayor’s Masked Ball!!! The men’s donations helped the organization to surpass their goal of $1 million.

According to the UNCF, these donations will help support 37 historically black colleges that are within the network of the organization. These donations also help to support over 60,000 students a year attend college, and there have been more than 430,000 beneficiary graduates from this monetary support. Some of these universities include Jarvis Christian College, Wiley College, and Huston-Tillotson University.

Of course Gibson took to IG about how proud he was of his brothers answering the call to donate to the organization. Here is what he posted on his page:

Just wanna send some love to the Mayor of Atlanta who I don't think will ever ever understand how much he means to me and those who he ALWAYS goes out of his way to support and show love to…. The good word says GIVE and shall be given unto you….. As much as you give and look out and continue to show up for others last night we wanted to show up for you!!! We raised MILLION at the Atlanta Masquerade #MAYORSBALL last night in conjunction with UNICEF I proudly jumped out there and donated 25,000 and my brother Usher didn't even blink and marched it…. 25,000 then my guy @jeezy jumped out there 25,000 and everyone else in the room felt like that had to step it up!!!! Then I got a text message from my brother @ludacris who jumped out there and matched us at 25,000 it was just amazing and MILLIONS OF DOLLARS was raised and we're going to put our angles through college……… I did it for the kids, @kasimreed keep doing WHAT you do good brother when I say I got your back it's not just words!!!!!! We're supposed to be inspired by our friends and you inspire me…… You represent what's possible if you work hard and weather storms….. To everyone in the room you guys are ANGELS for being willing to reach in your pockets and give your hard earned money to those who needed it the most!!!!!! "The mind is a terrible thing to waste"…… @uncf some folks just do it for the Gram…. We all stepped UP and did it for real.!!!! To God be all the glory……

We are just as proud of these men for giving back to the universities that educated African-Americans before we were allowed to be educated in other institutions. These contributions are yet another way of saying that historically black colleges and universities still educate some of the world’s best scholars even after the Reconstruction and Civil Rights eras.

For more information on how you can obtain a scholarship from the UNCF, click here, or go to www.uncf.org.