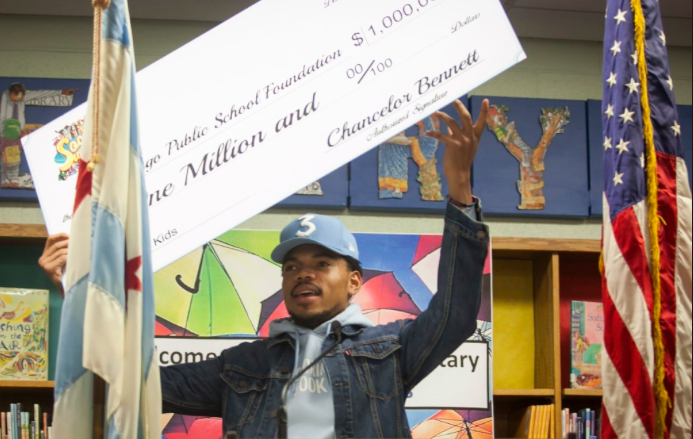 Chance the Rapper keeps on making change, this time in his hometown!

Chance the Rapper has had a successful 2017 so far. He took home three Grammys for his critically-acclaimed “Coloring Book” mixtape. Celebrating this milestone, Chance decided to give back in a major way.

According to pitchfork.com, Chance donated $1 million to the Chicago Public School Foundation on Tuesday. The big wave received numerous support all over social media, praising the rapper for giving back, not only to his hometown, but to those in need of a better education.

Chance, whose real name is Chancellor Johnathan Bennett, has been a part of the philanthropic and civil action for his hometown of Chicago.

The announcement follows his meeting with Illinois Governor Bruce Rauner last week in discussion of important issues affecting Chicago as well as the state of Illinois.

His gift comes at a moment when the city is grappling with a crisis over funding its schools. The rapper, who was educated in the Chicago’s public schools, had been a vocal advocate for fixing the budget issues confronting the school system, which is the nation’s third largest, serving over 400,000 students. It is facing a budget deficit that could bring an early end to the school year.

“Governor Rauner can use his executive power to give Chicago’s children the resources they need to fulfill their God-given right to learn,” he said at a news conference. “While I’m frustrated and disappointed in the governor’s inaction, that will not stop me from continuing to do all I can to support Chicago’s most valuable resource: its children.”

His donation will be split among 10 public elementary and high schools.

Even former First Lady, Michelle Obama, took to Twitter to highlight and congratulate Chance on his deed, calling him an “example of the power of arts education.”

He and rapper Common, also a Chicago native, plan to discuss plans for further funding.