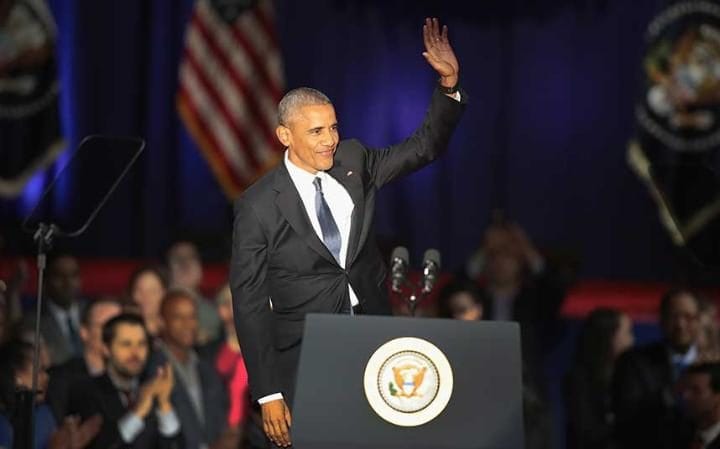 Last Tuesday night was the night that America got to say farewell to the nation’s 44th President. It was broadcasted all over every news channel you could think of and it was worth it. Obama gave his farewell speech in his hometown of Chicago and that very moment sunk in with a lot of Americans. Here was the nation’s first black President; a man who expanded Pell Grant funding, cut the deficit and killed Osama Bin Laden. If that’s not one of the most successful moments in history, I don’t know what is.
New York Times’s own website broadcasted the entire speech as well as its script. President Obama addressed his humble beginnings in Chicago and how he was just a young man searching for himself. As he talked, the crowd chanted “Four More Years!” and with the sense of humor he has, he said, “I can’t do that!”
He continued to talk about the beginnings of his term and how within his term America was able to reboot the auto industry, shut down Iraq’s nuclear program, win marriage equality and secure health insurance for twenty million more citizens, with the hope that it would get done. But instead of taking all the credit for it, Obama credited Americans as being a part of the change.
Although Trump’s inauguration is in less than a week, Obama did not shy away from what everyone is fearing for the next four years: a democracy ruined with a rapid-fire businessman.
“In 10 days the world will witness a hallmark of our democracy. No, no, no, no, no. The peaceful transfer of power from one freely-elected President to the next. I committed to President-Elect Trump that my administration would ensure the smoothest possible transition, just as President Bush did for me.”
A key highlight of his speech was his demand that Americans get heavily involved in politics. Not only should we vote but if we are upset with our elected officials then we should try to run for office. “Show up, dive in and stay at it,” Obama stated. We will win some and we will lose some but through it all, we are doing something beneficial to our society.
In his remarkable farewell speech, he gave accolades to his wife, First Lady Michelle Obama as a testament to their twenty-five year marriage as well as their two terms in the White House.
“Michelle LaVaughn Robinson of the Southside,” he paused watching the standing ovation to his wife, “for the past 25 years you have not only been my wife and mother of my children, you have been my best friend. You took on a role that you didn’t ask for. And you made it your own with grace and with grit and with style, and good humor.”
“You made the White House a place that belongs to everybody and a new generation sets its sights higher because it has you as a role model. You have made me proud and you have made the country proud.”
As his final farewell to the very place that both welcomed him and shunned him, he addressed the one thing that his campaign relied on: hope.

“My fellow Americans, it has been the honor of my life to serve you. I won’t stop; in fact, I will be right there with you, as a citizen, for all my remaining days. But for now, whether you are young or whether you’re young at heart, I do have one final ask of you as your president — the same thing I asked when you took a chance on me eight years ago.
“I am asking you to believe. Not in my ability to bring about change — but in yours.”
As he looked into the crowd, you can see that the realization has hit him. There it was, eight years of hard work and dedication to make America greater than it was before. The countless times he was talked about or even praised for some of the executive decisions he had to make. In eight years, he accomplished more than was given credit to and it worked: America remained faithful in his beliefs to bring about change.
“Thank you. God bless you. And may God continue to bless the United States of America. Thank you.”

Even celebrities bid farewell to Obama after his final speech. Stars like Katy Perry, Drake and Ellen DeGeneres all showed special tributes via their Twitter and Instagram of their favorites memories with the President. Some included memes, personal feelings and even pictures from special events the President held in the White House with lovely captions to add that last special touch.

Obama may or may not have done things agreeable in some people’s favor but you can’t deny that he is the “people’s choice” among Presidents.