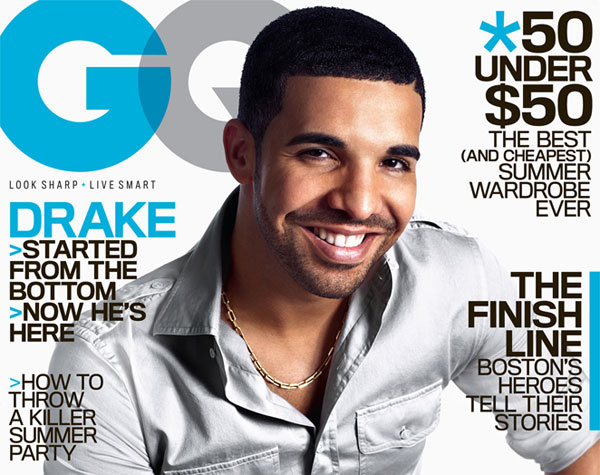 I’m sorry, to me there is NO SEXIER MAN/RAPPER on the planet right now than Drake.  I told someone once that you can tell when someone “loves women and appreciates the full female body” just from his lyrics.  So when this press release from GQ came across the desk this morning, I had to grab and share with the rest of the fans out there.

Take a look at what was sent below, excerpts courtesy of GQ.  Then go pick up an issue of the magazine, which will be on newsstands everywhere on June 25:

When he was just 23, Drake set a goal for himself: make $25 million by the time he was 25 years old by rapping about money, cars, girls, and—here’s the bizarre part—his rawest feelings and emotions. He achieved it. Easily. Now 26, Drake sits down with GQ’s Michael Paterniti to reflect on his time in the spotlight, the criticism he’s faced from other rappers, the transition from rapping in his basement to packing arenas across the nation, PLUS that infamous fight with Chris Brown over Rihanna. And as he readies his most inspired album yet, Drake reveals his exponentially more ambitious plans for the future: becoming #1 among the hip-hop giants like Kanye & Jay-Z. “I ain’t gonna lie,” he says. “I want to be the one you listen to this summer.”

Drake on his feud with Chris Brown:

“I don’t want my name to be synonymous with that guy’s name. I really don’t. I wish we could sit down, just like you and me are right now, and talk it out man-to-man. But that’s not going to happen. I’m not confrontational, but if someone challenges, I’m not going to back down. …It’s embarrassing, the amount of media coverage. Two rappers fighting over the woman. He’s not even a rapper, but still, it’s the last way you want your name out there. It distracts from the music. But he’s made me the enemy, and that’s the way it’s gonna stay, I guess. …If I think about it too much, I feel it wrapping around my foot, like I get a feeling it could end really badly.”

…on his pursuit of love, and the advice he received from Will Smith:

“I had lunch the other day with someone I extremely look up to. Okay—I had lunch with Will Smith, and listening to him talk, it made me think I don’t know what love is. He said something profound. He said love is when you become one and you need that person. It’s not about wanting anymore, you need that person. Hearing that, I don’t know if I’ve ever felt that way. I’ve held women in very high regard almost to the point where I felt like I needed them for a very long time, but I don’t know if I comprehend it yet, and I’m okay with that. I’ve made a lot of music about love being the only thing I’m missing. I think this is the first album I’ve made saying, I’m okay. I’m enjoying it right now. Maybe this is my time to grind it out, make a run for it and add some memories with my boys.”

…on focusing on his album rather than sex:

“You know the way fighters don’t fuck before the fight? Sometimes I feel like I’m so focused on training my body and getting my mind right to create this album that sex isn’t one of my main priorities. If someone is around that I know and trust, I’m down. But I’m not going to end up with some stranger at this party.”

…on future ambitions, including his goal of making $250 million by the time he’s 29:

“I feel this great responsibility to see how far can we take it, how out of reach can I set that bar for whoever comes after. While I’m here, I’m gonna keep pushing that bar higher and higher up and make you really work for it.”

…on becoming #1, and re-creating the excitement of his early career:

“You constantly ask yourself: Will I ever be able to excite people the way I did when the Internet was going crazy, back when you first felt like you had a piece of Drake that no one else had, and you wanted to share it with your friends? Is there an album or song we can make now that’s good enough to get people that excited again? I ain’t gonna lie: I want to be the one you listen to this summer.”

Click here to read the full article at GQ.com.

Also, check out his photo shoot and behind-the-scenes video.