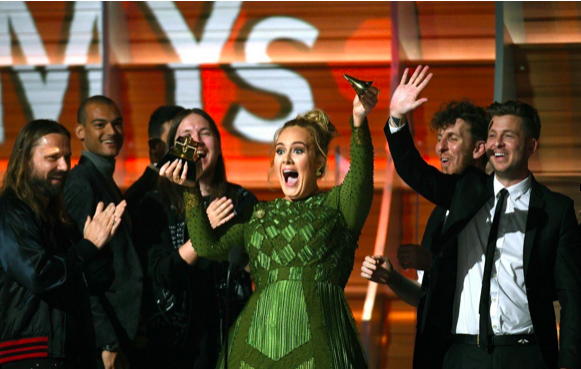 If you watched the Grammys on Feb. 12, a few of our favorite artists snabbed Grammy awards back to back. According to grammy.com, Adele took home five Grammys for Hello, Chance the Rapper won Best New Artist, Solange won Best R&B performance for Cranes In the Sky, and Beyonce won Best Urban Contemporary Album for the 59th Annual Grammy Awards.
Although Adele reigned during the night, she praised and honored Queen Bey during her acceptance speech for Album of the Year. She thanked Beyonce’ for making an album that empowered her black friends and made them want to stand up for themselves. Now, if you ask me, when a white woman praises a black woman and mentions the cringe-worthy term “black friends,” it can be a little unsettling. What could have and should have been stated was “empowering women of color,” but this is for calls for a different post.
I did manage to look past the term and saw that Adele took notice that this was the time to embrace the movement for women of color. Lemonade may not have been (what others say) Beyonce’s best quality, booty-shaking or boss bitchy album, she did exemplify the black girl magic that others seem to ignore or underestimate.
Adele made it known that Lemonade should have won “Album of the Year” and she even went out of her way to break her grammy with Beyonce’ and share the moment. Bey looked in adoration and seemed to have watery eyes as Adele saluted the body of work.
Kudos to Adele for taking notice and recognizing a real queen when she sees one! She is the epitome of a humble, talented and secure woman!