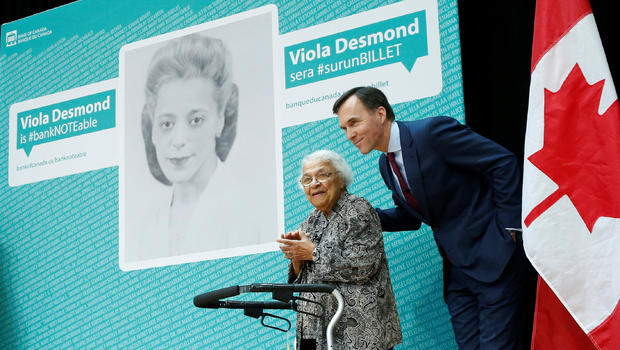 A black woman becomes #bankNOTEable in Canada!!! Activist Viola Desmond will be on Canada’s $10 bill!

Many of us know that Canada had a Civil Rights Movement of their own, and black people from all over the world were taking a stand through public sit-ins and other boycotts that showed many business owners and public officials that we were not going to be undermined and mocked any longer without a fight. One of those brave people was Canadian activist Viola Desmond.

Many have not heard of Desmond, however, Canada is about to make that change. While in a Nova Scotia theater, Desmond, 32 at the time, sparked the country’s Civil Right Movement by sitting in the whites-only section on Nov. 8, 1946. Although she was fined and arrested, she encouraged the people of Canada to take a stand against racism and segregation within their own country.

This recognition will give Desmond, now deceased, the honor of being the first woman to be on a $10 bill.

Wanda Robson, Desmond’s sister, stated with pride while at the announcement that “It’s a big day for a woman to be on a banknote. It’s a really big day to have my big sister on a banknote… She (Desmond) inspired them as she inspires us.” Her sister, now 89, also noted that ”She was elegant, with perfect manners and she treated everyone with respect.”

We just can’t keep up with so many queens receiving so much recognition for daring to make bold, life-changing decisions, but we will definitely try. Congratulations to Canada and the family of Viola Desmond for this wonderful achievement!!!