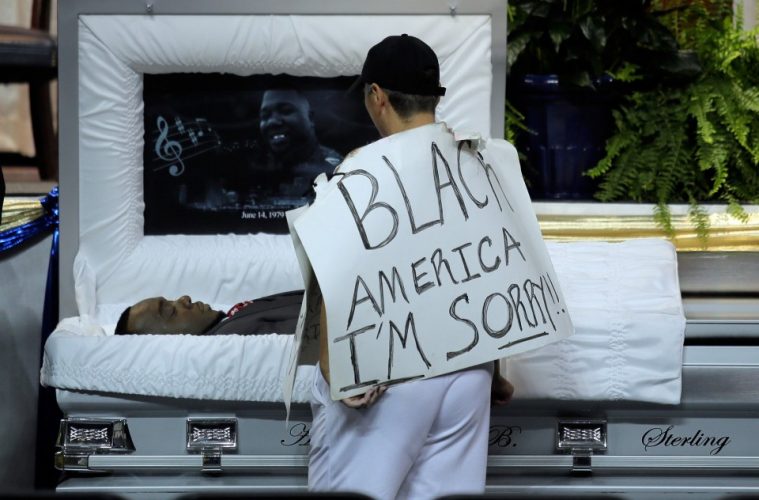 Justice for Alton Sterling: Will there ever be?

Alton Sterling was laid to rest Friday, and while the world mourns his murder, along with his grief-stricken family, we have to ask — WILL THERE EVER BE JUSTICE FOR STERLING? Not likely, not if we just look at history.

Trayvon Martin, Eric Garner, Mike Brown and now Sterling are just a few of the innocent black men who have lost their lives due to hate and police brutality.

In Baton Rouge, LA, 37-year-old Sterling was killed by two police officers, firing six shots into his chest. One cop shouted “gun” as Sterling laid on the pavement pinned to the ground by the two men.

Blaine Salamoni and Howi Lake were the officers called to the scene around 12:45 a.m. after receiving an “anonymous tip” that a man in a red shirt, who was selling CDs, pointed a gun at someone.

We now know this call was made by a homeless man who asked Sterling for money.  It is said that Sterling told the man ‘NO,” then pulled out his gun. The homeless man then called 911.

Sterling had permission to sell the CDs in front of the store and the store owner gave a statement saying that the cops were “aggressive” from the start.

The owner said “Sterling was armed but was not holding his gun, and didn’t have his hand near his pocket at the time of the shooting.”

Two extremely graphic videos of the incident have surfaced, recorded by bystanders, showing the world the last few moments of Sterling’s life. The footage is heartbreaking.

The first video is recorded at a side view from inside of a car parked at the convenience  store. In the first video, Sterling’s back is towards the camera as one officer bomb rushes him to the ground as the other helps push him to the ground. Then you can see one cop pin his left arm down with his knee, and the other has his right hand pinned down as well.

The second video gives us a more clear view as another bystander records just a foot away from the incident.

This time Sterling is already on the ground and you can clearly see the cops have him restrained.

One cop yells “He’s got a gun” as both of his hands are pinned, then you see the other cop draw his pistol pointing it blank range at his chest. Just seconds after, you hear gun shots erupt and the officer screams “get on the ground” when in all actuality, he was already on the ground and unable to move!

Furthermore, although the two videos show two different angles, one thing that remains the same is that

he was restrained on the ground, with no visible weapon and not resisting arrest.  Yet and still, he was still shot six times. To add insult to injury, for those who wish to argue that he did have a gun, well that’s not against the law in a OPEN CARRY STATE, which Baton Rouge happens to be.

The fact remains that yet another one of our Black Kings has lost his life at the hands of a police officer.

Another hashtag, another family that has to grow up without a father. This man has five kids that all had to watch their father being murdered on the internet whether they wanted to see it or not.

For what? For selling CDs to provide for his family? For standing outside of a convenience store where he was permitted to be? Or was it because two overzealous white officers couldn’t handle one black man?

Maybe, in fact, it was because he was BLACK. We can all draw our own conclusions from this, but one thing is for certain, this man was murdered, point blank period.

Heartbreaking photos of Sterling’s funeral were posted on Times Picayune.  Click here to see the slideshow.

At Sterling’s funeral Friday, Vicki Yohe sang “I’m at Peace,” which sent chills down the spines of everyone in the audience and watching it around the world.