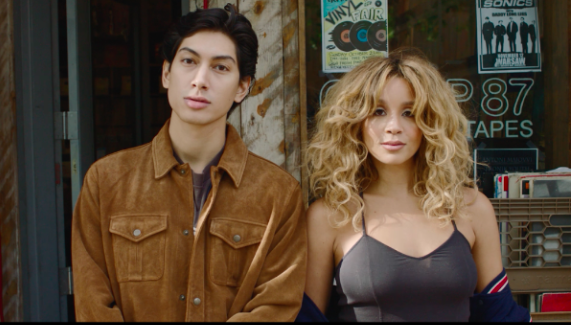 NEW YORK, NY — Former Miss America Vanessa Williams’ daughter is creating quite a name for herself, and we are pleased to share the music for her new video. New York-based R&B/Soul duo LION BABE, with Hervey as the vocalist and producer Lucas Goodman, have released the video for their new song “Got Body.” The song is taken from their debut album, Begin, which was released earlier this year to critical acclaim. The video was directed by Julian Branciforte.

The video for the self-empowering song was shot in and around LION BABE’s own stomping grounds of East Village and Lower East Side in New York. A day-in-the-life, the clip follows Jillian and Lucas on a typical day from riding the subway to hunting for Vinyl (Jillian even finds an old LP of her mother’s!) to working on new music in their home studio, to hanging out with friends.

Most recently, LION BABE released a modern spin on Tom Jones’ 1970’s hit “She’s A Lady.” The electro-tinged track was featured in H&M’s Fall 2016 campaign, in which  Hervey also starred. The duo made their network television debut in October, performing “She’s A Lady” on The TODAY Show, which can be viewed here. Earlier this summer, the duo released their first-ever mixtape, Sun Joint, in conjunction with their first headlining tour of North America. The project, which featured tracks like lead single “Endless Summer” and live favorite “Tina Turner,” expertly weaves together the band’s signature Technicolor pallet of sounds, including soul, funk, electronics and earworm melodies, further pushing the signature sound LION BABE developed on their debut album. The duo is currently gearing up to release a new music project, which will be out before the end of the year.

Watch the “Got Body” video below!

Constantly embracing polarity, mixing and matching sounds and visuals to create something new and unique – LION BABE are the New York duo formed of singer/songwriter and performance artist Jillian Hervey and instrumentalist / producer Lucas Goodman aka Astro Raw. After the organic creation of the sultry, electronic soul track ‘Treat Me Like Fire’, they decided to give the song a home and create LION BABE. LION BABE draw on an eclectic mix of influences for their sonic and stunning visuals, which mirror the rich melting pot of cultures that New York offers. Citing the likes of A Tribe Called Quest and Sergeant Pepper-era Beatles as having a major impact on them both in their formative years, they identify with a generation brought up on the internet, with references from film and music of all genres, places and eras being just a click away. They released their debut studio album Begin earlier this year after a buzzed-about self-titled EP and string of singles, including “Treat Me Like Fire” and “Jump Hi” featuring Childish Gambino. The duo has since toured the world extensively, playing some of the largest music festivals in the world, and have collaborated with the likes of Pharrell Williams, Disclosure and more.