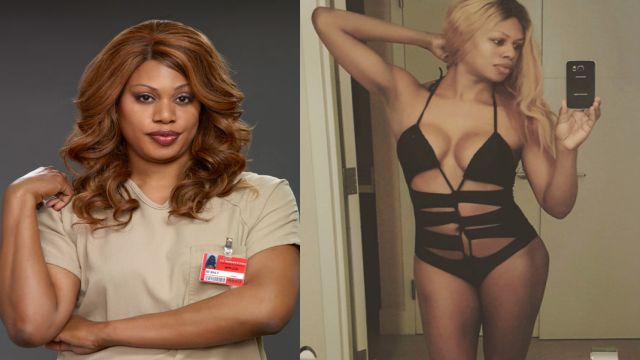 Actress, reality television producer and LGBT advocate Laverne Cox turned a few heads when she showed off her bikini body in the winter!

The “Orange is the New Black” star posted a selfie on her Instagram showing off her sexy one-piece swimsuit with the caption, “This girl desperately needs a vacation.  Earlier before I hit the pool. #TransIsBeautiful.”

This girl desperately needs a vacation. Earlier before I hit the pool. #TransIsBeautiful

Earlier in June, Cox sat down with The Guardian and spoke about transgender issues, self love and being comfortable in her own skin.

“I have been picking myself apart my whole life,” she said. “Years ago, I wanted really highly invasive surgical procedures to feminize my face. All these years later, I have the money to do it, but I don’t want it. I don’t want it! I’m happy that this is the face that God gave me, and it’s imperfect.”

A recent Instagram commenter told Cox she should get a nose job, but she was having no parts of that.

“No, girl! My fans were like, that’s the nose African Americans have, and what’s wrong with that? My fans had my back. In those moments I have to look in the mirror and say, this is my black nose, and it’s gorgeous,” she said.

Cox even spoke about the #TransIsBeautiful movement after the Vanity Fair cover was released in attempt to “multiply trans narratives.”

She noted that both her and Caitlyn’s situations are considered privileged, while the lives of many other transgender stories are waiting to be told.

“I started the hashtag to celebrate all the things that are beautiful about my transness,” she explained.

Well, good for her.  We love a woman with confidence!