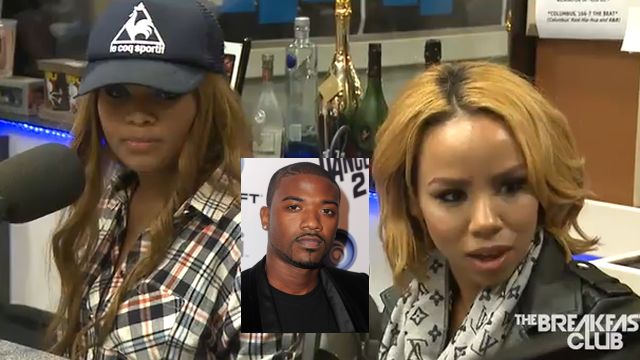 One day after it seems all hell broke loose during the taping of yet another Love and Hip Hop reunion, Teairra Mari and Morgan Hardman of the “Hollywood” edition sat down with the Breakfast Club to talk about the drama and the man in the middle of plenty of it — Ray J.

There were plenty of accusations flying around against Brandy’s little brother, and his ex girlfriend (Teairra) and former assistant (Morgan) painted a very disturbing picture of the actor/singer.

The most heinous accusation is, not only does Ray J allegedly abuse women, but takes his frustration out on innocent kids as well.

Morgan claims that after the two of them had a falling out, “Uncle Ray J” demanded that her 11-year-old son be dropped from his little league team.  Morgan tearfully said that she has no family besides her son, and that Ray J has been the only male role model in her son’s life.  She said the little league basketball team was afraid to lose Ray J’s contributions of $2,000 every three months, so they decided to side with their benefactor.

If that is true, then all we can do is shake our heads.

Morgan says Ray J assaulted her in front of her son and claims she has audio confirmation of the alleged assualt.  Morgan says she doubts Ray J, who is being painted to be an egomaniac, will ever apologize.

“He doesn’t have a soul,” Morgan said.  “As long as he is what’s popping in the media, that is all he cares about.  he will lie and do whatever.  I’ve seen this sh** for too long and am just done.”

Teairra Mari had little to say during the interview, seeming to still be in shock from whatever happened during the show.  She said she could not give anything away, but was “blindsided.”

Looks like the Hollywood folks are definitely giving the Atlanta crew a run for their money.   We are sure show producers are very pleased.

Check out the Youtube video, courtesy of the Breakfast Club.