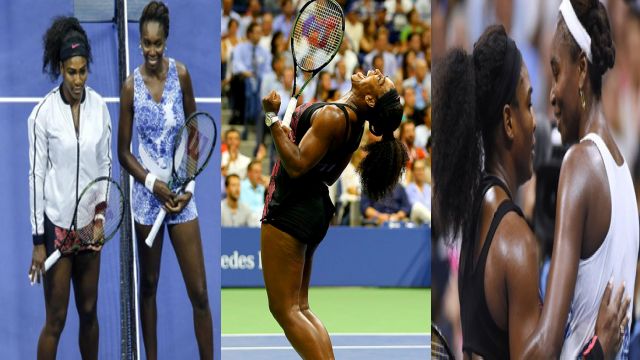 A sibling rivalry like no other!  Serena Williams defeated her older sister, Venus Williams, in an intense match Tuesday night in the U.S. Open quarterfinals and is now moving on to the semi-finals.

Please believe Venus 23rd- ranked didn’t go easy on her top-seeded little sister Serena, she made her work for the win in a three- back-and forth set 6-2, 1-6, 6-3. Serena is now two matches from making history, she could become the first player to win all four Grand Slam titles in the same year since Steffi Graf in 1988.

“She’s the toughest player I’ve ever played in my life and the best person I know,” Serena said in an on-court interview. “It’s going against your best friend and at the same time going against the greatest competitor, for me, in women’s tennis.”
This latest match makes it the 27th time the Williams sisters squared off against each other on the professional level. Serena is 16-11 in their matches, including 9-5 in majors, and 3-2 at the U.S. Open.

Everyone was anxious to watch another Williams vs. Williams rivalry; even Oprah Winfrey and Kim Kardashian were in attendance. If Serena can hold her ground and win, it would be her fourth U.S. Open in a row, and seventh overall. She’ll face Italy’s Roberta Vinci, currently ranked 43d in the world in the semi-finals on Thursday.

Click here to take a look at the Williams sister’s statistics.