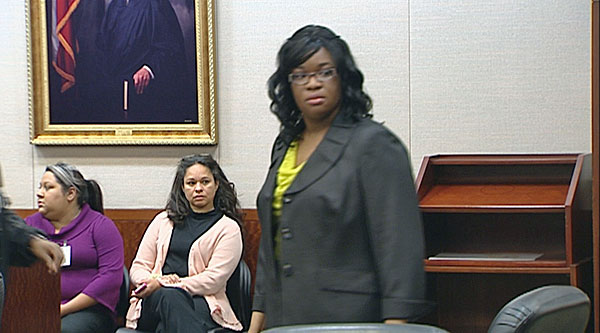 HOUSTON—Jurors began deliberating Monday the punishment for Jessica Tata after finding her guilty of murder last week in the day care fire that killed four children and injured three others. Tata left the babies alone while she went shopping in February 2011.

Tata was convicted of felony murder in the death of 16-month-old Elias Castillo, one of the children killed if the fire.  Elizabeth Kojah, Kendyll Stradford and Shomari Dickerson died by his side.

On Feb. 24, 2011, a pot of oil Tata left burning on the stove caught fire, leaving the trapped babies defenseless as smoke and flames spread throughout the west Houston day care. Just 24 hours after the tragedy, Tata hopped a plane to Nigeria while some parents were left to identify their children’s bodies and others sat with the badly injured survivors at hospital burn units.

Tata’s attorney, Mike DeGeurin, urged jurors not to get caught up in their emotions when deciding her punishment.

“You can’t fix what happened,” he said. “An excessive sentence doesn’t fix anything.”

DeGeurin described his client as a loving woman who just made a bad decision.

“She thought they would be OK. She loved them. Elizabeth, she had been caring for since she was like this,” DeGeurin said, cradling his arms to suggest the size of the child. “Elias; one of her favorites, (she) not only cared for him, but babysat for him and kept him overnight.”

He said Tata had a special connection with each child.

“All those children, she knew them all – Shomari – knew what they liked, knew who wanted the beanie weenies and who wanted something else,” DeGeurin said. “She knew all that, and she thought, ‘They’ll be alright, I’ll go to Target and they’ll be asleep. When I get back, they’ll be fine.’”

DeGeurin went on to say that Tata did what she was required to do, which was to lock the doors so the children could not get out while she was out running errands. He said she simply did not contemplate that a fire would break out.

DeGeurin said Tata desperately tried to help the children after pulling up and seeing the house on fire. She was able to grab two of the children, but the heat was too unbearable to save the others.

“It was just too hot. And so the tragedy happened,” he said.

When it was her turn, prosecutor Connie Spence began to chip away at DeGeurin’s claim of the fire being an accident.

“You know Mr. DeGeurin throughout this trial used the word ‘accident,’” Spence said. “An accident is an unforeseen event that couldn’t be helped. You can’t do something wrong, you can’t be doing something you ought not be doing and then, when something bad results from you not doing what you promised to do, and say it was an ‘accident, I didn’t mean it.’”

She said what unfolded that tragic day was “inevitable” and “months in the making.”

Spence laid out the timeline of events on the day of the fatal fire, then went back and showed how leaving the children was nothing more than standard practice for the day care provider. She reminded jurors of multiple witnesses who testified that Tata often left the children alone, and one man even made a police report after finding 10 to 12 children alone in the house. She said the babies walked up to the man like “little ducklings” and Tata was nowhere to be found. Instead of taking action, police told him to call Children’s Protective Services.

She also reminded jurors of Tata’s past behavior, calling her a bully who hated authority.

Tata was known for picking on other students and intentionally set two fires in high school. As an adult, she continued to defy authority by committing welfare fraud and operating without a license, Spence said.

She said Tata’s choice to become a child care provider was only for her benefit, not the children’s.

Those children, Spence said, were completely under Tata’s control.

Spence said the day the fire broke out, Tata made 40 phone calls and went to a donut shop, Walmart, Target and Starbucks, with little or no regard for the kids. She held up a picture taken from surveillance video showing Tata taking her time selecting products while the fire was sweeping through her home.

“While she was gone at Target, while she was selecting the Gatorade, that fire was going,” she said. “Think about those children waking up, what must they have been thinking? What does a 20-month-old think when he wakes up and there’s smoke and they can’t get out? They don’t even know what to do,” Spence said.

Spence said Tata’s decision was not just some innocent mistake and she should be punished accordingly.

“That day, when she made the choice to leave, she doomed them,” she said.

Tata faces from five years to life in prison.