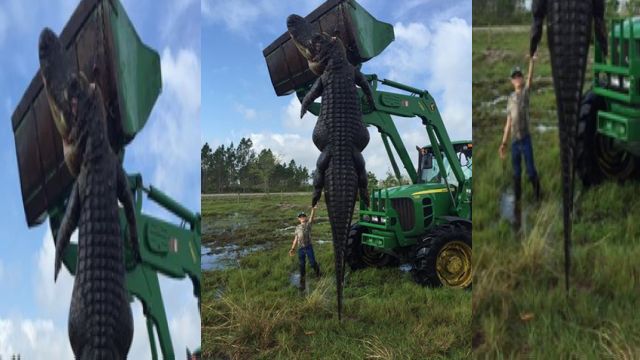 Hunters in Florida got a whopper of a catch after they tracked down one big a$$ alligator over the weekend!

Lee Lightsey, owner of Outwest Farms, was hog-hunting with his son, a guide and two hunters when they came across the big boy.

“He was in our bull pasture and he could catch a bull but as far as us we knew he was there, we weren’t gonna get in the water,” Lightsey said.

Lightsey says the gator weighed in at 780 pounds.  Experts say this is definitely can be considered a once-in-a-lifetime catch.

Photo of the catch was posted Outwest Farm’s Facebook page.

“Gators that size are hundreds of years old and they’re few and far between,” Lightsey said.

The state record for the longest alligator caught is 14 feet, three and a half inches, according to the Florida Fish and Wildlife Conservation Committee. The remains of the gator are already being harvested.

All we can say is…what the heck are these things feeding on out there.  This thing is as big as GODZILLA!