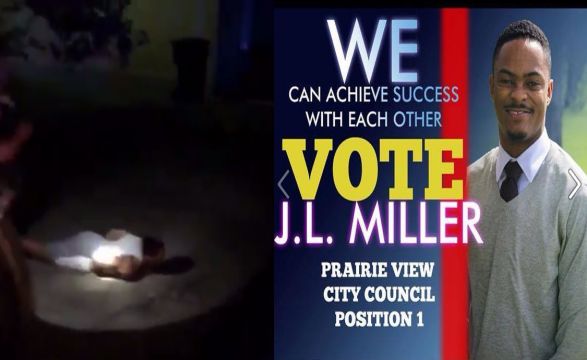 HOUSTON — A Prairie View city councilman and alumnus was arrested and tased Wednesday night in front of his home.

The fraternity brothers left Miller’s home around 8 a.m. and were stopped by a female officer with the Prairie View Police Department.

One of the men, Brandon Woodson, said the officer demanded to see identification and they complied.

“We went outside to change our shoes for step practice, and the police pulled up to the house. They began to harass us, and started running our licenses,” Woodson said.

Miller saw the lights outside his home and went to investigate, and a second officer arrived to the scene. That is when the situation escalated, Woodson said.

Woodson said police ordered Miller to go back inside, but Miller refused, saying that he lived on the property and was concerned for his guests.

“When they saw that he was not moving, especially from his own home, they began to harass him, tased him and arrested him for no reason.”

Woodson said police slammed Miller to the ground, and when he came back up, he was tased. Miller was then taken into custody.

Woodson recorded the incident on his cellphone and the video was posted on social media.

“For five police officers to not know who their city councilman is, that’s a problem,” said graduating senior and fraternity member Colby Polk. “I’ve never seen any other political figure get tased by police in their community. I’ve never seen it.”