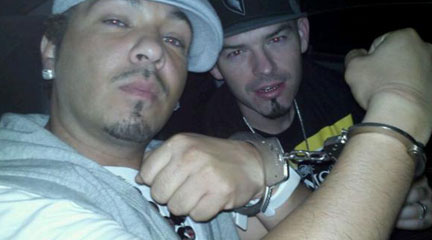 EL PASO, Texas — Well, it’s not the end of the world, but a well-known Houston rapper had a run-in with the law this weekend.  Paul Michael Slayton (Paul Wall) and Ronald Ray Bryant (Baby Bash) were arrested in El Paso for pot possession, according to the El Paso Times.  The rappers were in town to perform at the Summer Jam 2011.

According to an affidavit obtained by the El Paso Times, deputy constables received reports of a white Ford van parked in the parking lot of the Rudolph Plaza Shopping Center around 1:30 a.m.

Constables observed four men; 30-year-old Paul Wall, 41-year-old Baby Bash, manager Darryl Gooden and the van’s driver, Roy Anes Mata walk from the van and into a nightclub.  The constables approached the men and asked them to return to the vehicle.

While they were interviewing the group, officers thought they smelled weed all over the group’s clothing and looming from the van.   Deputies then asked permission to search the vehicle, which they were granted.

During their search, they recovered a “blunt marijuana cigarette” on a Taco Bell glass in the console.  They also found a glass vial and a loose, green leafy substance.

Paul Wall and his peeps allegedly owned up to smoking the pot, but no one exactly claimed ownership, but you know that does not change a thing.

The men were arrested after officers determined they all were within reasonable reach of the pot and charged with possession of marijuana in a drug-free zone.  It is not clear if Gooden was arrested with the others. The rappers were released at about 1 p.m. Sunday after paying a $300 bond each.

After their release, what did they do?  What they all do – released a Twitpic of themselves handcuffed in the patrol car.

But it did not stop there; “41-year-old”  “Baby Bash” threw a temper tantrum of sorts on social network sites bashing the officers.

“Ain’t 2much worse than a ” H–A– PUNK EL PASO COP that abuses his authority,jus cuz me and Paul wall are artists! Only GEEKS and fools who don’t have any spine abuses AUthority! But I’m back in the FLESH feelin so FRESH, out the tank mang! Lol. […]

I’m not here to diss ALL police, they have a tuff gig and I respect that! BUT u have the ONE or TWO that will disrespect & abuse the power cuz maybe they got picked on in high school alot and now have a chip on they’re shoulder, and that’s exactly wut happened to Us, all we did was SMELL like weed and wen he couldn’t find it and we didn’t snitch on who sparked it he got overdramatic and took us in! He found out who we were and really got big shot on us! Haha even his partner said he’s a d–k, […]

Get it together, guys!