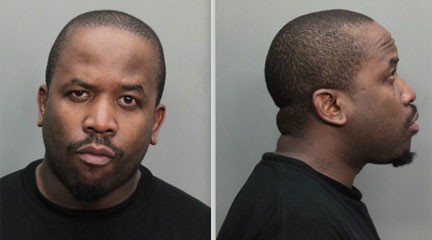 Big Boi of OutKast busted for Ecstasy, Viagara in Miami

MIAMI—Grammy-winning OutKast rapper Big Boi was arrested Sunday on charges of illegally possessing drugs, according to police.  Police say a K-9 dog smelled drugs on 36-year-old Antwan Patton (Big Boi) as he was getting off a cruise ship in Miami.

During a pat down, police discovered Ecstasy, Viagra pills and a cigarette roller with marijuana residue.

According to the Miami-Dade County Corrections website, he was also carrying MDMA, which is the main ingredient in Ecstasy.

Big Boi was always thought to be the “calmer” side of OutKast, as his persona was the polar opposite of group member Andre 3000.

Together, the duo won six Grammys and churned out six platinum-plus albums, including “Speakerboxxx/The Love Below,” which sold over 10 million copies.

Ecstasy, Viagra and “The Love Below,” — we guess — amd from the look of his mug shot, we can imagine he is not happy that all of his “personal business” is now out there in the streets.

We wish him luck as he is a talented, well-respected hip hop artist and we would hate for him to go down the all-too-familiar path of other infamously incarcerated rappers.