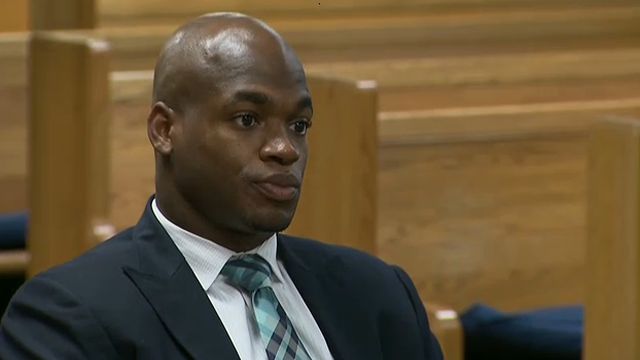 NFL suspends Adrian Peterson without pay for remainder of 2014 season

The NFL is sending a clear message on abuse after handing down a tough decision against star running back Adrian Peterson.

The Minnesota Vikings player was notified Tuesday that he has been suspended without pay for at least the remainder of the 2014 NFL season, and will not be considered for reinstatement before April 15, for violating the NFL Personal Conduct Policy in an incident of abusive discipline that he inflicted on his four-year-old son last May. Peterson pled no contest on November 4 in state court in Montgomery County, Texas to reckless assault of the child.

In a letter to Peterson, Commissioner Roger Goodell said, “The timing of your potential reinstatement will be based on the results of the counseling and treatment program set forth in this decision. Under this two-step approach, the precise length of the suspension will depend on your actions. We are prepared to put in place a program that can help you to succeed, but no program can succeed without your genuine and continuing engagement.  You must commit yourself to your counseling and rehabilitative effort, properly care for your children, and have no further violations of law or league policy.”

Under Article 46 of the Collective Bargaining Agreement, Peterson may appeal the decision by giving written notice to the commissioner within three business days. If he appeals, a hearing will be scheduled promptly, at which he may be represented by counsel of his choice and by the NFLPA and at which he will have the opportunity to present evidence in support of his appeal. If he appeals, Peterson will remain on the Exempt List and continue to be paid pending a decision.

In modifying the NFL Personal Conduct Policy August 28, Commissioner Goodell established a baseline discipline of a suspension without pay for six games for certain offenses, including a first offense of assault, battery, or domestic violence.  He also identified aggravating circumstances that would warrant higher levels of discipline. In his letter, Commissioner Goodell identified several aggravating circumstances present in this case:

“First, the injury was inflicted on a child who was only four years old.  The difference in size and strength between you and the child is significant, and your actions clearly caused physical injury to the child.  While an adult may have a number of options when confronted with abuse – to flee, to fight back, or to seek help from law enforcement – none of those options is realistically available to a four-year old child.  Further, the injury inflicted on your son includes the emotional and psychological trauma to a young child who suffers criminal physical abuse at the hands of his father.

“Second, the repetitive use of a switch in this instance is the functional equivalent of a weapon, particularly in the hands of someone with the strength of an accomplished professional athlete.

“Third, you have shown no meaningful remorse for your conduct.  When indicted, you acknowledged what you did but said that you would not ‘eliminate whooping my kids’ and defended your conduct in numerous published text messages to the child’s mother. You also said that you felt ‘very confident with my actions because I know my intent.’ These comments raise the serious concern that you do not fully appreciate the seriousness of your conduct, or even worse, that you may feel free to engage in similar conduct in the future.”

On November 6, the NFL requested that Peterson and the NFL Players Association furnish a range of information that would be relevant to evaluating Peterson’s conduct under the Personal Conduct Policy.  No information was provided beyond some of the court papers relating to his November 4 plea agreement. This request was reiterated on November 11. Although there were several additional exchanges of correspondence between the NFL and NFLPA, no further information was provided, other than the name of a professional with whom Peterson has consulted during the past two months.

Peterson was advised on November 11 that a hearing had been scheduled for November 14 to review his case and to allow him or his representatives, as well as the NFLPA, to offer their views and present information on the question of discipline under the Personal Conduct Policy. The NFL then was advised that neither Peterson nor the NFLPA would participate in the hearing scheduled for November 14. The NFL offered to hold the hearing the following day, but was told that date was similarly unacceptable.

“Your plea agreement in Texas, and the related violation of the Personal Conduct Policy, arise out of abusive injuries that you inflicted on your son earlier this year,” Commissioner Goodell said in his letter. “Based on public reports of your statements and photographs that were made public at the time of the indictment, you used a ‘switch’ – a flexible tree branch – to punish your son, striking him in the ankles, limbs, back, buttocks, and genitals, leaving visible swelling, marks, and cuts on his body and risking severe and long-term damage. The visible injuries were such that a local pediatrician in Minnesota, upon examining your son, felt obligated to make a child abuse report to the police. According to contemporaneous media reports, police and medical examiners termed the cuts as ‘extensive’ and as ‘clinically diagnostic of child physical abuse.’ Based on the severity of those injuries, a grand jury made up of citizens of Montgomery County, Texas, voted to indict you on a felony charge, reflecting their belief that there was reasonable cause to conclude that you had overstepped the bounds of acceptable corporal punishment and engaged in physical abuse of your child. Moreover, it appears that this is not the first time that you have punished children in this way. Public statements attributed to you indicate that you believe that this kind of discipline is appropriate and that you do not intend to stop disciplining your children this way.”

Commissioner Goodell’s decision includes mechanisms to ensure, insofar as possible, that there will be no repetition of this conduct. Peterson was directed to meet with Dr. April Kuchuk, an instructor in the NYU Department of Psychiatry and a forensic consultant to the New York City District Attorney’s offices and New York courts, by December 1. After this meeting, Dr. Kuchuk will design a program of counseling, therapy, and community service as appropriate, which will be shared with the commissioner and NFLPA. Peterson will be expected to adhere to that program. Dr. Kuchuk will report any failure to do so to the commissioner and NFLPA.

On Sunday, Peterson made Dr. Cynthia Winston, a professor of psychology at Howard University, available to meet with Dr. Kuchuk to discuss the case. Dr. Winston advised that she was contacted by an attorney representing Peterson to conduct an assessment and that she has met with him in connection with this matter. Dr. Winston, a respected academic and practicing psychologist, advised Dr. Kuchuk that she does not have a background in child abuse or in assessing or treating victims or perpetrators of child abuse.

Dr. Kuchuk has informed the NFL she believes it is essential for her to meet with Peterson personally to review his counseling and other therapeutic work to date. Dr. Kuchuk states that two evidence-based forms of therapy have been shown to contribute to reducing the risk of future abusive behavior in child abuse cases: first, therapy that addresses parenting your children, in particular those who do not live with you, using a modality called parent-child interactive therapy; and second, cognitive-behavioral therapy that teaches the effects of abusive behavior on children and how it traumatizes them. Dr. Kuchuk’s understanding is that Dr. Winston does not provide these types of cognitive and behavioral therapies.

Commissioner Goodell encouraged Peterson to take advantage of the counseling and other resources available to his son through NFL Player Assistance and Counseling Services.

“The well-being of your children is of paramount concern,” Commissioner Goodell wrote. “In the absence of speaking to you to understand your current disposition toward child discipline, we cannot be sure that this conduct will not be repeated.  Moreover, we are unaware of any effort on your part to acknowledge the seriousness of your conduct and your responsibility to demonstrate a genuine commitment to change.

“In order to assess your progress going forward, I will establish periodic reviews, the first of which will be on or about April 15, 2015. At that time, I will meet with you and your representatives and the NFLPA to review the extent to which you have complied with your program of counseling and therapy and both made and lived up to an affirmative commitment to change such that this conduct will not occur again. A failure to cooperate and follow your plan will result in a lengthier suspension without pay.”

Peterson also is required to adhere to all conditions imposed on him by the Montgomery County Court as part of his plea agreement and deferred adjudication. If he fails to adhere to any of those conditions, he is obligated to promptly report that failure to the commissioner, who may elect to impose further discipline.

“It is imperative that you to avoid any incident of this kind in the future,” Commissioner Goodell stated in his letter. “Any further violation of the Personal Conduct Policy will result in additional discipline and may subject you to banishment from the NFL.”

“The NFL has informed the Vikings of today’s decision regarding Adrian Peterson. We respect the league’s decision and will have no further comment at this time,” the Vikings said in a released statement.

The NFL Players Association said they will be appealing the decision and issued the following statement.

“The decision by the NFL to suspend Adrian Peterson is another example of the credibility gap that exists between the agreements they make and the actions they take. Since Adrian’s legal matter was adjudicated, the NFL has ignored their obligations and attempted to impose a new and arbitrary disciplinary proceeding.

The facts are that Adrian has asked for a meeting with Roger Goodell, the discipline imposed is inconsistent and an NFL executive told Adrian that his time on the Commissioner’s list would be considered as time served.

The NFLPA will appeal this suspension and will demand that a neutral arbitrator oversee the appeal.

We call on the NFL Management Council to show our players and our sponsors leadership by committing to collective bargaining so a fair personal conduct policy can be implemented as quickly as possible.”