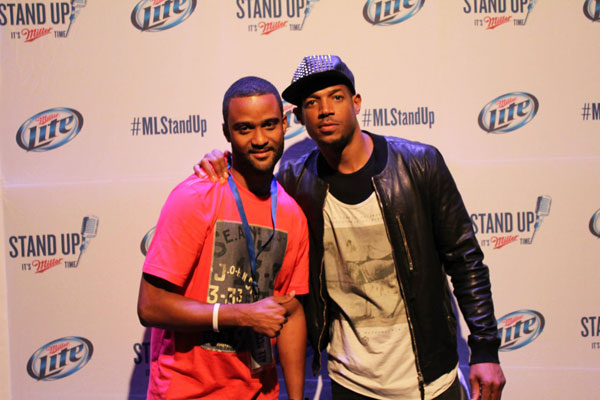 Houston’s ‘most known unknown’ laughing his way to the top, giving back along the way

HOUSTON—One of Houston’s “best kept secrets” may not be much of a secret for long because this funny man is making moves and laughing his way all the way to the top.  If you don’t know “Blame the Comic,” you will soon because he is making the rounds and leaving us hurting (from laughter) in his path.

Born Marion Stafford, this H-Town native who likes to call himself the “most known unknown” experienced early success in his career with an appearance on B.E.T’s hit comedy competition show, “Coming to the Stage” in 2004.  He has also won a couple of national competitions, including “The Kings and Queens of Comedy” competition (2004) and was the regional winner (college category) at the Las Vegas Comedy Festival held at the Stardust Hotel. “All I want to do is deliver that positive cry of the soul which is laughter, and have my audience escape reality for the moment as they laugh in total bliss and gut wrenching humor,” the comedian quoted on his website, adding that his wish is to have you live, laugh, love and then laugh some more.

And that is exactly what he had me doing during an interview a day before he was to head to New Orleans to compete in the Miller Lite competition, judged by Marlon Wayans.

We got all the “who you are, what you doings, what’s yo mama’s name and how did you grow up” out of the way then got down to business. Q:  When it comes to someone throwing caution to the wind and following their dreams, do you recommend that they have something to fall back on?

A:  That’s what my ultimate plan was. I did finish college at University of Houston with a degree in Communications/ Media Production and a minor in English so I did want to have something to fall back on because you never know where life is going to take you, what twists and turns so who knows.  You know Mom may get sick, and how are you going to sustain because it is hard out there if you don’t have anything to fall back on.  Or just working a little odd job waiting tables, or whatever it may be.  I mean, who doesn’t want a safety net?

Q:  Did you ever see yourself giving this up?

A:  No, I love it too much.  I’m always looking for exposure and opportunities, you know what I mean.  Just that next big thing that will give me an opportunity or a foot in the door.  And I think that is the hardest part.  Luckily, I am working with a new team and this is another journey and opportunity for people to say “Hey, who is this guy?”

Q:  Some comedians say they will only want to do stand-up.  Do you want to do more and venture from the live stage and into movie projects or plays, etc.

A:  I do love the stage, but I would love to do movies and other projects.  I am just waiting for that opportunity.

Q:  Who is the comedian that you’ve been honored to work with thus far?

A:  I’ve been honored to work with Thomas Miles, Nephew Tommy, of the Steve Harvey Morning Show.  He has definitely taken me under his wing a little bit and took me on the road and provided me with opportunities that I probably would not have had.  I’ve been doing a lot more traveling since I’ve been dealing with him.  Just to see what it is like for a guy who is on the level above me and how it goes and some of the rules of how you handle yourself out on the road and just the etiquette of how things are supposed to happen.

Q:  Who is it your dream to work with in the future where you can say “I’ve really made it!”

A:  I would really love to do a movie with definitely Martin Lawrence or Jaime Foxx or a movie with Mike Epps because I feel like my improv or comedic stylings; that’s who I can most identify with.  If things go well for this Miller Lite competition with Marlon Wayans, I would love for that to happen because their stuff is always kind of silly and edgy.

Q:  Here is something crazy, I’m just curious, in high school, what were your electives?

A: Home economics; I made some boxer drawers, I played golf and automechanics.

Q: No theater?  (I couldn’t resist asking because he was such a natural talent)

Q: So how did you train yourself for this part of your life?

A:  I just think I really just identify with “funny”. If I see it, I get it.  Like I tell people sometimes, I don’t always need the stage, if I make myself laugh, then I know it’s funny.

Q:  How was your first show?  Did you bring the house down or did you get heckled?

A:  My first show was at the Mercury Room in downtown Houston.  There was not a whole lot of people, I was more into what I call bafoonery back then.  It was around the time when that D’Angelo song was out and I was all on the stage with baby oil on my chest and clothes pins on my nipples, just wild, just trying to get that laugh.  After learning and talking to other comics, I learned that’s really not the way.  You don’t have to do all of that.  You don’t have to expose yourself, you don’t have to get naked. Your standup is in your dialogue and the substance of your topic.

Q:  Could you ever see yourself doing a show in a pair of leather pants (laughter)?

A:  You know, that’s the pinnacle of every black standup comic.  I don’t know if I may try to be a trendsetter and change the game or I might run with the foundation that’s been laid.

Q:  What can your hometown do to get behind you and support you more?

A:  Just keep supporting black comedy.  Just because you don’t know them or ever heard of them, that does not necessarily mean that they are not funny.  I think that some of the funniest people are people are undiscovered. Blame is a certified special education teacher and early childhood specialist so, naturally, children are near and dear to him.  His charity, Humor for Hope, is a non-profit that teaches kids self-esteem through comedy.  The charity is supporting kids for the upcoming school year by participating in a school supply drive at the Northeast Houston YMCA.  Those wishing to lend their support, can make donations on behalf of Humor for Hope at the facility located at 7901 Tidwell Road; Houston, TX 77028 through August 31.

In addition, Blame is also currently hosting at De Joint Comedy Club – 5337 East Hampton Circle on every third Friday of the month to give other up-and-coming comedians exposure.

As for the Miller Lite competition, our guy gave a great show, but was narrowly beat out by another comic.  Always the positive go-getter, Blame relished in the great feedback received from the judges and is pushing forward.  Remember the ultimate goal?  Leather pants, of course……..

Check out one of Blame’s funny Youtube parody “After da Club” videos!

“Girl, this is nice, he got the Bill Cosby picture in here.”