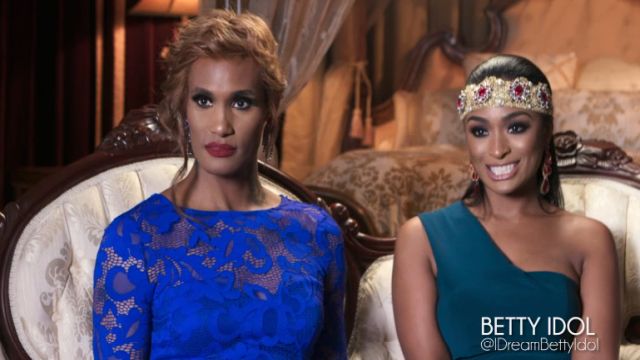 It looks like an H-Town girl will be shaking things up in A-Town, and her divalicious friend with a very interesting story to tell are going to be the new pot stirrers on season five of “Love and Hip Hop Atlanta.”

Houston’s own Betty Idol, 26, describes herself as a “hit maker,” and the singer/ song writer has been featured on songs with heavyweights including Rick Ross, Two Chainz and Lil’ Wayne.

Her partner in crime, D. Smith,described her as a ball of energy who is very genuine and loyal., but a bit hard to control. We guess so because we hear the Colombian/ Black spitfire is gonna’ have a good ole’ fashioned girl fight on the show. tsk…tsk.

Betty says her girl D. Smith is “just that Bitch,” as in a [boss] bitch. She is a two-time Grammy Award winning producer who’s worked with everyone from Lil’ Wayne, to Kerri Hilson, to Andre 3000.

And one other thing, for those of you who don’t know, D. Smith was born a man.

The fierce diva explained her own “tea” on Instagram.

A lot of people loved the person on the left but, this person was put together with bits and pieces of what society wanted. This person was so far gone in satisfying everyone else, that one started to loose touch with one’s true authentic self. That person use to be me! I’ve judged people for being who they were. I was angry and insecure. I dated beautiful girls. When I say beautiful, I mean BEAUTIFUL girls that I cheated on with men because I couldn’t fight my deep feelings for them. Afraid of loosing or disappointing my family and friends, I lived a terrible lie. I’ve hurt so many people because of this. My career. OMG my career! ?? The church, going to the gym, selling music, the money and most importantly, my life. I could loose it all. To be honest, I’m ashamed of the person I use to be. To think, I’m not the only one with this story… Hello, I am D. Smith. That sexy, fearless and last but not least, genius ?? woman on the right is me! I am officially 1year and 6 months into my transition. With that being said, for the first time in my life I am honest. Not only to myself, but to the world around me. I have nothing to hide, which leaves me no choice but to live free. Now I don’t have to worry about hiding in the shadows of a lie and feeling that horrible feeling when I hurt someone that I truly care about. This message isn’t an attempt for acceptance and to be quite frank with you MF’s, I don’t give a fuck! Lol. I wrote this because I am no longer hiding! I am a PROUD Trans Woman!!!!!???? #transisbeautiful #love #me #trans #new #beforeandafter #2016 #God #blessed #pride #girlslikeus #fashion #lgbt #power #all #beautifulpeople #us #now #fashion #face #music #happy #finally

D. Smith and Betty discuss says they will be sharing their successful music careers, exposing their vulnerabilities on camera, and creating awareness for real struggle and talent. D. Smith says the duo is also going to put some people in check.

Countdown. Check out the new bitches on the block here.