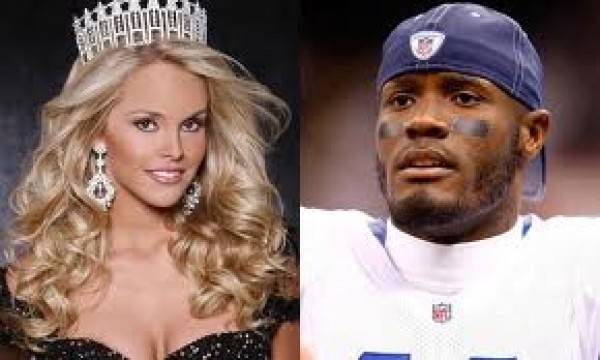 How much postage does it take to mail a $76,000 engagement ring?  Depends how much egg on your face goes with it!  What a story!

Dallas Cowboy football player Roy Williams wanted to add a Texas “trophy wife,” complete with crown, to his collection—so, what does he do?  Well, he mailed an engagement ring and a taped proposal to what he hoped would be his “mail order” bride-to-be, but former Miss Texas USA Brooke Daniels said ‘No thanks.’

Just one problem – she kept the ring.

Well, that didn’t sit quite right with Williams – you think?  So he filed a lawsuit on June 30 demanding Daniels to return the ring.

Daniels initially told Williams she lost the 3.0 6 carat E color S.I.1 blinger, but that turned out to be false.

Like any good southern gal, she gave it to her daddy for safekeeping.

And like any good southern father protecting his baby girl, Michael Daniels of Tomball, Texas said his family did not need the aggravation and he would return the ring to avoid a lawsuit.

“I want to wash my hands of it,” Daniels told the Odessa American newspaper Tuesday. “It’s just a hassle. I’ll take care of my daughter. I don’t need him.”

A hearing was supposed to take place Friday in Odessa, Texas, where the suit was filed, but it’s been canceled because the case has been settled.

According to ESPN, the Daniels family has returned the ring!

It was a no-brainer, because according to Texas law:

If the man is at fault, the woman gets to keep the ring.

If the woman is at fault, the man gets to keep the ring.

If neither is at fault and they go their separate ways, the ring goes back to man.

Just in case you’re wondering what “at fault” means, it means breaking off the engagement or cheating on the fiancée.

Next time Williams may want to try a classier approach when trying to turn his girlfriend into a fiancée.

Put a stamp on it, she’s done!