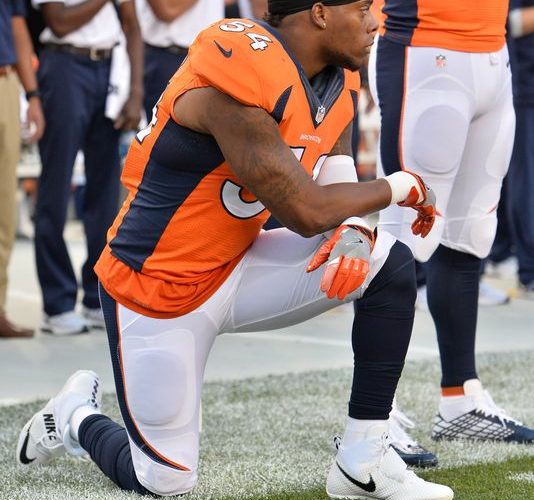 It seems as though Kaepernick is not the only one receiving a lot of backlash for choosing to use his first amendment right. Denver linebacker Brandon Marshall decided to join Kaepernick in this silent protest during a game between the Broncos and Carolina Panthers and has since lost endorsements from Air Academy Federal Credit Union and CenturyLink. Marshall isn’t too upset about it though!

Entrepreneur and Hip-Hop mogul Russell Simmons is replacing that loss and has reached out to him about endorsing the Simmons’ Rush Card. According to NBC Sports, Marshall stated that “I spoke with Russell Simmons… They’re endorsing me, The Rush Card and he said he was going to speak with me today (Sept. 15). I spoke with him the last two days. He’s going to talk to me today about the parameters of the deal, what it comes with. I lost two, but I gain one.”

Marshall knew that he would face repercussions for his decision, however, he is now able to be sponsored by someone who actually believes in what he is protesting. He expressed that “I didn’t breach my contract. I didn’t get arrested, I didn’t do anything to defame the team or CenturyLink or Air Academy. I just exercised my first amendment rights and they drop me for that… So for Russell Simmons to come up and step in, I think that’s great. I’m proud of what I did because I didn’t do anything that’s wrong or hurtful by any stretch.”

We are proud of yet another athlete for deciding to utilize their right to bring much-needed attention and awareness to the issues of the injustices in this country! Awesome way to use your platform, Brandon!