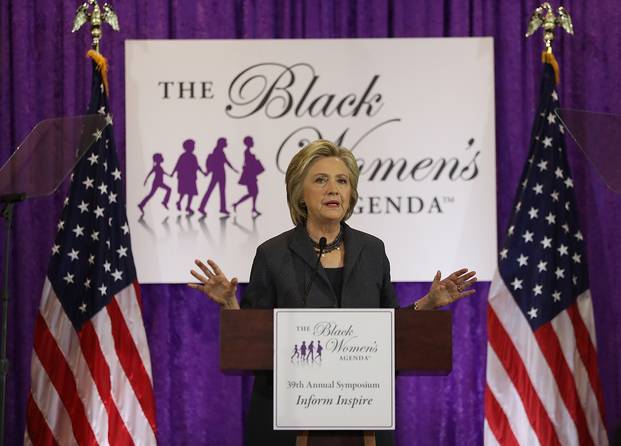 Hillary Clinton collected a few brownie points while speaking to audience members at the 39th annual Black Women’s Agenda Symposium Workshop and Awards Luncheon. During the duration of her speech, the future President of the United States praised Black women for who they are and what they do.

According to the Huffington Post, Clinton stated that Black women “leave the house every morning, put on that game face that we all practice, and enter a society that consistently challenges your worth – with the images you see, the lower pay that so many take home; that try to silence our voices and break your spirits. That you remain fierce in the face of the challenges.”

Clinton further stated that “While your stories are often missing from the history books, make no mistake, you are the change-makers, the path breakers and the ground shakers.”

In addition to focusing on Black women, Hillary Clinton told Essence Magazine in a recent interview that “There’s a very clear set of issues that are particularly important to African-American women. I will continue to reach out to say, ‘Look, we’ve got to build on the progress. I can’t do it without you. I want to know what you need, and I want you to know that I’m going to do everything I can to respond to those needs.’”

We hear you, Mrs. Clinton, and we thank you for putting a spotlight on the strength and resilience of the Black woman!