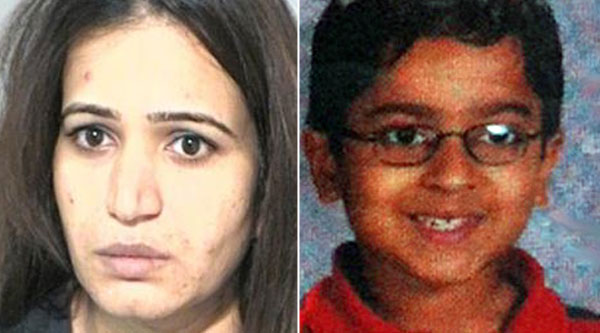 HOUSTON— The 9-year-old boy who disappeared after school Monday afternoon knew his abductor, according to the Fort Bend County Sheriff’s Office. After keeping the child overnight, the woman who kidnapped him dropped him off at an Islamic Center in Stafford, deputies said.

Several witnesses said he was seen with a white, balding male in a red Toyota, but those reports were erroneous. Deputies said Amsal was actually taken by 34-year-old Kismat Momin, who lived in his apartment complex.

Investigators said Momin took the child and rode around with him all night—possibly to Galveston County—before dropping him off at the Islamic Center on Corporate Drive and Dairy Ashford around 6:20 a.m. Tuesday.

More than 150 volunteers joined Fort Bend County Sheriff’s deputies, a special team for the FBI and Richmond police to comb the wooded area near Amsal’s home throughout the night in hopes of finding the child alive. They all celebrated after hearing news of the boy’s safe return.

Investigators said Amsal’s family was familiar with Momin, but they do not know to what extent.

“She does reside in the same complex. She is known to the family to some degree, we are still investigating at this point exactly what the connection is with the family. She was known to the young man; other than that we don’t know what her motivation was,” said Fort Bend County Chief Deputy Craig Brady at a press conference Tuesday morning.

While interviewing apartment residents, some very keen investigators realized Momin’s husband knew a little more than he was telling and forced him to “fess up.”

“One of our investigators and a patrol deputy on the last round of the apartments actually interviewed the person of interest’s husband and noted that there were some discrepancies in some of the things that he was saying.,” Chief Brady said. “They turned the heat up on him a little bit and he admitted that he had known since early on that the child was with his wife. We believe he contacted her and told her and that she needed to bring him back.”

Several others may also be charged for their connections with the case.

“There were some family members involved and communicating with her during this entire process,” Chief Brady said. “Part of the investigation, I think, will ultimately reveal that there were people that had knowledge that were not forthcoming with it. That’s what we are looking at at this time.”

The people who withheld the information could be culpable as co-defendants or accessories to the kidnapping offense.

Investigators said Momin used an old tactic to convince Amsal to go with her.

“Early on, there was some indication that she used an old ruse that had been around for years; that his parents asked her to pick him up because there were some people trying to get him,” Chief Brady explained.

Chief Brady said Amsal did not know anything was wrong up until the time he was dropped off at the church.

“He seems perfectly normal and fine. I think he was wondering what was going on,” he said. “If the story we heard early on was accurate, I believe that he thought that he was actually being assisted by a family friend who was keeping him from anyone who was trying to get him.”

There is also evidence that someone in the boy’s household had contact with Momin at the time he went missing.

“There are some things that seem strange in this case. There was no indication there was any type of ransom or things of that nature. Like I said, this lady was known to the family, lived in the same complex and they knew the lady had a vehicle that fit this description,” Chief Brady said, adding that he understood the nightmare Amsal’s parents had gone through.

“If my 9-year-old was missing, they’d probably have to commit me. I can’t imagine someone doing that to people,” he said.

Momin has a prior charge of misdemeanor theft.