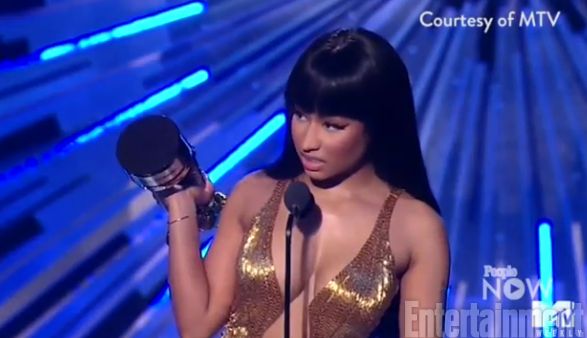 ‘What’s good’ at VMAs: Kanye wants to be president, Taylor shines all night and Nicki calls out Miley

There was a bunch of madness mixed with the entertainment at the 2015 MTV Video Music Awards.  Some beefs were squashed, others lingered and comebacks were in the house.

Starting out nicely, Justin Bieber, who seems to have grown up a little, cried after his performance.

Taylor Swift and Nicki Minaj showed the crowd there was no beef between them and opened the night with an electrifying performance.  And Taylor even showed their was “no beef” between her and Kanye West remaining from Kanye’s infamous showstopping-stage stealing, thunder stealing VMA moment in 2009 when he discredited Swift’s win and proclaimed Beyonce was the real queen.

Now, on the other hand, Nicki showed there was no making up between her and Disney’s Hannah Montana.

Nicki was all smiles as she accepted her award for Anaconda, but in her true “split personality” fashion that we all love, the bodacious femme fatale rapper turned the tables and called out Miley Cyrus, who was hosting the night, for things she said at a press conference in regard to the Taylor/ Nicki “beef.”

“And now…back to..this bitch that had a lot to say about me the other day in the press.  Miley, what’s good?” Nicki said.

Miley tried to blow it off as “industry talk” and congratulated Nicki on her award.  But the look on Nicki’s face says she still was not having it.

Oh yeah, Kanye went on another one of his infamous, yet controlled, rants and at the end of it all he announced his presidential bid in 2020.  The Kardashians may seem to rule the world, but not everyone can blow money like “The Donald.” But hey, stranger things have happened.

Check out a recap of some of the night’s favorite moments!