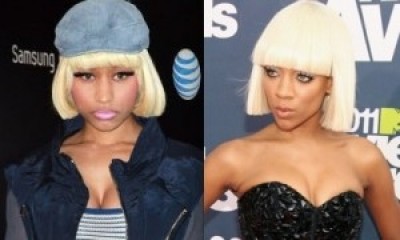 A lot of things we read, we don’t bother reposting or giving an opinion because a lot of things people say are taken out of context.  We surely thought that was the case when rapper Lil’ Mama said Nicki Minaj was biting HER style, according to Vibe.com.

But, ok, we can say this:  While everyone should think highly of themselves — and obviously Lil Mama does — her opinion of herself may not exactly match what appears to be the majority consensus in the hip hop community:  She was wrong to compare herself to Nicki Minaj.

Either Lil Mama is a BS artist specializing in publicity stunts – like when she jumped on stage (uninvited) with Jay Z and Alicia Keys and ruined their performance of New York – or she is suffering from “Delusions of Grandeur”.  I don’t say this to put her down specifically, I would say this to anyone who would think that a Bob haircut—which has been around since the days of Cleopatra—was an original style to be copied. Fashion, these days, is ever-evolving and repetitive…Have you heard the saying, “everything old is new again?”

I mean, anyone who thinks that Lady Gaga is this millenium’s trendsetter has obvioulsy not been in a strip-club boutique.  Her styles are straight off the vibrating runway with the strobe lights, the fans blowing up the dress from the bottom of the stage and a nice, big pole extended up the middle.  But oh yeah, she won a fashion award for that.  So…..moving on! What do we know? (wink)

Lesson of the day:  think before you speak.

Rather than getting long-winded about how ridiculous this may sound, I would rather share with you some excerpts from the Vibe interview and let you decide for yourself.

Vibe:  I think the biggest style criticism was thrown at you this past MTV Movie Awards. Bunch of people thought you jacked Nicki’s haircut.

Lil Mama:  But my cut is blunt and futuristic and Nicki Minaj started wearing that bob on her head after she came to my show, so at the end of the day I know what I do and I know what I possess and I know who I am. I’m a trendsetter. The biggest form of flattery is imitation, so I’m flattered. I understand the universal law. I’m not confused; I don’t feel like a follower. I started so many things that new artists are doing now anyway –my style, the way I’m aggressive on a track, the way I come through, the way my beat bangs. There are so many things that were borrowed; that I influenced that’s happening in music right, so I’m far from discouraged.

Vibe:  Well there you go. Wait, Nicki came through to one went to one of your shows?

Lil Mama:  Yeah, she was a guest on America’s Best Dance Crew and immediately afterward, everywhere she went, she was wearing the haircut, the same exact way. But that doesn’t make me feel like ‘Oh she’s trying to be down’ like how I said about our culture. I’m actually flattered because she imitated me and it felt like something that I was doing was cute and in time for the fashion and for the season, so it’s like let’s live, let’s do it.

Vibe:  When I first interviewed you back in the day, you mentioned how other female rappers didn’t embrace you much. Has that changed or stayed the same?

Lil Mama:  It hasn’t really changed. You know what, let me catch myself. MC Lyte definitely embraces me. Jada Pinkett Smith embraces me. Those are two people that I can call and get advice. Those are two people that will call me to see what I’m doing. I think that everybody else that’s still on the radar like Missy and [Lil] Kim, feel so challenged right now. The root of female rap now is all about your swag and doing things independently. Everything is just boosted up to where these females who created the platform for us feel imitated. The kind of in that position right now where they feel like ‘Don’t get it twisted because I will drag you…’

Vibe:  Ha! Were you and Nicki at least able to chop it up after her episode of ABDC?

Lil Mama:  We didn’t really get a chance to vibe out like that after the show. It was just business. It was a level of respect though. Despite of what anybody might hear or have to say through the web, internet, music, subliminals, or whatever, when people see me in this industry I am respected and I will be respected. Anything else goes under the rug so I don’t see it. Whoever it may be, it’s always a level of respect because I respect myself and I will be respected.

But in all fairness, Lil Mama did give a valid point about how black female emcees are pitted against each other while doing the same thing that artists of other colors do:

Vibe:  Interesting thing is that leftfield style is actually becoming more of the norm. How do you react to folks saying your biting Nicki Minaj and Lady Gaga?

Lil Mama:  Come on, let’s be real okay. You have all these people wearing different colored hair. At the end of the day I’m a bombshell, so I’m going to do me. If I want to go platinum, I’m going platinum. Let’s not forget that we have had people doing these things way before the people who are doing it now and let’s also not forget that the black community sometimes we really hang ourselves because every time another black female gets up there and does something that may be current, we criticize each other and try to put each other down, but when Katy Perry and Lady Gaga do it, they all eat. But I’m not going to be a part of that. I’m going to do me, regardless.

Now how she goes from one viewpoint to the next is beyond us, but we guess it’s like she said:  “I’m doing me.”

We wish her much success.