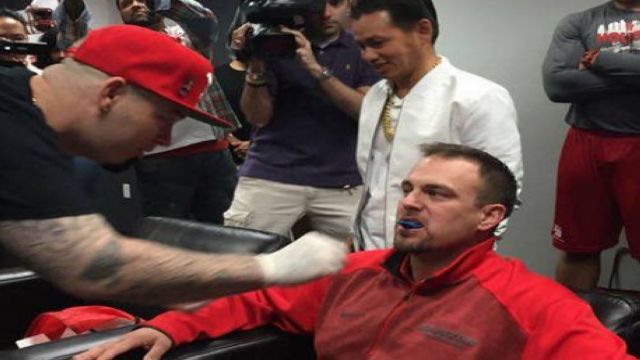 University of Houston football coach Tom Herman might blind you now when he opens his mouth.  It seems as though Herman kept his promise to his team by putting his money where his mouth is and got fitted for a diamond grill. Yep, ICED OUT!

“Ice Man” rapper Paul Wall made his way down to UH headquarters to personally fit the ACC Champ for his very own blinged out grill.

Before the Coogs took the win against Temple in the American Athletic Conference, a deal was made. Herman promised his team if they brought home the “W” he would get a diamond grill.

So what did the almighty Coogs do on December 5?
They brought the city a championship; advancing to the Chick-Fil-A Peach Bowl on December 31 in Atlanta.

Paul Wall says the grill that he’s custom designing for Herman will be worth a little under $15,000.

Cha-ching! That’s enough to have his whole mouth lit up, causing “a cold front if he takes a deep breath.”

The design will be debuted next week and we can’t wait to see the coach’s new swagger grill!

Will his new look be so captivating that it gives everyone chills? Hmmmmmmm……….