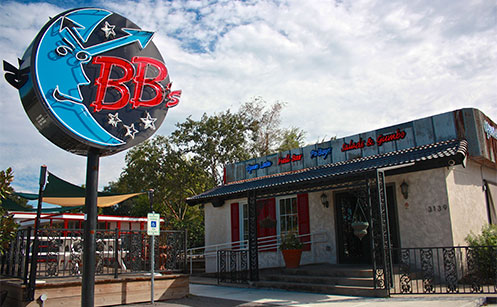 $2 from every entrée will be donated to the 46ers, the restricted giving fund of Houston Football.

Designed in consultation with Applewhite and BB’s owner and founder, UH Track & Field alum Brooks Bassler, the entrée will consist of a combination of catfish, crawfish and shrimp etouffee with garlic bread, white and dirty rice.

Available at all seven BB’s Café locations throughout the Houston area, $2 from every Applewhite entrée will be donated to the 46ers, the restricted giving fund of Houston Football under the Cougar Pride fundraising umbrella.

Applewhite is the second member of the #HTownTakeover to receive the honor of an entrée at BB’s Café as Houston alum and recent Super Bowl champion Elandon Roberts debuted The Elandon in July. The plate which consists of grilled redfish over cilantro rice, one chicken skewer and two stuffed shrimp benefits the Elandon Roberts Foundation that supports heart disease research.

2017 Houston Football Season Tickets
Houston Football fans can purchase season tickets for six games starting at just $175 at UHCougars.com/tickets or by contacting the Houston Athletics Ticket Office at 713.GO.COOGS (713.462.6647) or at tickets@central.uh.edu.