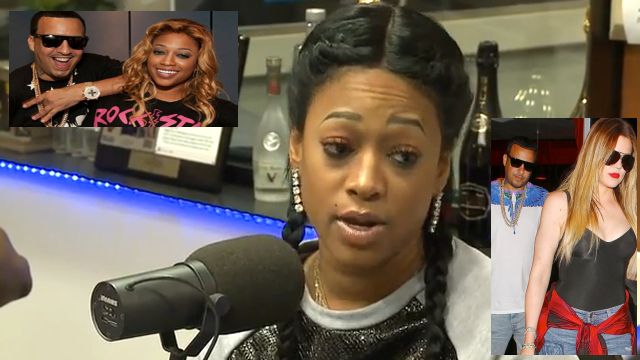 Trina talks about Love, Life and the ‘French Montana thing’

The self-proclaimed “Baddest B,” Trina, stopped by the Breakfast Klub to talk about her upcoming album, of course — LOVE– and the “situation” with her former  Boo-thang French Montana.

French Montana ended his “friendship” with Trina in order to run with Khloe Kardashian.  Just something about those Kardashian women, huh, that drives black men crazy!
Welp, anyway.

Trina showed an amazing amount of positivity, realness and maturity as she kept it real, as Montana should have, acknowledging that the two were never “officially” an item, but they spent plenty of time together –actually living together– as she did many “wifey” duties.

Montana tried to downplay all that when he started running around with Khloe, which is fraud in so many people’s opinions, saying that the he and Trina really had nothing going on and he was “just having fun.”

I wonder if that was to make Khloe feel better about breaking the “girl-code” with Trina, who she used to party with, in addition to big sis Kim and La La.

The girls hung out “back in the let’s go out, party, get high, have fun days,” Trina said.

As for Montana, Trina said he’s not a bad person, just immature in many ways.

“Just don’t be a donkey, right now you are on some donkey shit,” she said.

Trina summed it all up best, saying “I am living my life and I am very happy.  Things happen for a reason.”

We totally agree, girlfriend!  We wish you the best and look forward to the upcoming album!

Check out what she had to say about love, relationships and her future in an interview with the Breakfast Klub.