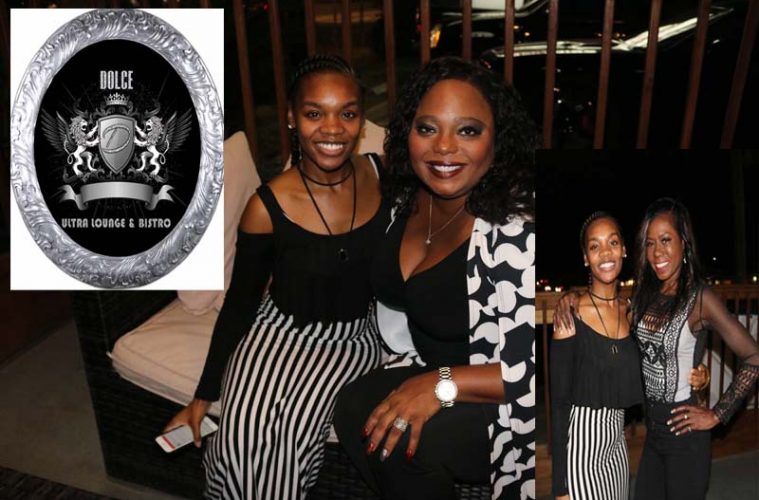 Real talk: Cocoa Brown, Melanie Comarcho speak about health, kids, success as they laugh their way to the top

Nikki Da Kid opened up the show as the first act with powerful, thought-provoking pieces that expressed her dislike for welfare and government assistance, depending on certain circumstances, as well as the dying breed of innocent, respect-driven children and teenagers that preoccupy the world we live in today. After Nikki’s dynamic performance, Hunt, small with an unabashed delivery, gave it to the audience raw and uncut as she talked about her son’s father and being incarcerated on multiple occasions. Powell, a Texas girl and fly in all of her glory, had everyone laughing as they could relate to her Black vs. White Star Spangled Banner renditions. These ladies had it going on, and proved that they could hang with any man in this industry!

News With Attitude got the chance to sit down with cutting-edge comediennes Brown and Comarcho. These ladies gave valuable insight about being successful in the industry as a woman and great advice about women wanting to actually grow while in the industry. Above all, these women love their children and have been making huge names for themselves for years!

Brown, an actress that became a comic, was a joy to talk to as she spoke candidly about her new healthy lifestyle, being on Shaq’s “Comedy All-Stars” show and playing “Jennifer” in Tyler Perry’s “For Better or Worse.” This beauty started doing community theater when she was 10 years old, so she was not new to the acting industry in any way! Brown said theater was always a big part of her life, however, she never thought she could make a living out of it because of her traditional Southern background.

Brown also mentioned Tyler Perry’s impact on her thriving career. She said, “Tyler Perry has a plethora of fans, so to be a part of that camp, it just increased my visibility, it increased my fans, and Tyler Perry fans are very loyal, and you know they support you no matter what. Working with Mr. Perry has been an amazing experience. It’s been six years, six seasons working with the entire cast. It’s just been an amazing, amazing experience.”

Brown said that even though she is a comedian, she admires people like Angela Bassett, Viola Davis, Octavia Spencer and Ruby Dee. She respects the craft and has definitely done the work to be in front of the camera, and off the screen.

When sharing details about her new, healthy lifestyle, she credits her son. Being a single mother, she wanted to make sure she was living a life that would allow her to be around longer for him.

“Having him changed everything in terms of getting healthier and making sure that I’m here on this earth to raise my child and watch him grow up,” she said.

After finding out she was pre-diabetic, she decided to remove her limitations without the pressure of the industry.

Brown is now venturing into the producing world, and plans to take on wearing the “Director Hat” in 2017. The sky is truly the limit for this queen!

Comarcho, widely known for her appearances on BET’s Comic View, Def Comedy Jam and for being the “Queen of Tours,” gave LIFE as she talked about empowering women and how she has remained a successful comic over the years. She told N.W.A., “No comic, male or female, has done as many tours as ‘moi,’ God is good!”

We couldn’t agree more with that statement! She’s been on tour with hard-hitting men like Katt Williams, Chris Tucker and Martin Lawrence, and has even toured with The Queens of Comedy. Needless to say, Comarcho knows comedy like the back of her hand.

“I’m working, and a lot of people that started in ’92 like I did are not. You don’t even know where they are anymore, so to all the young women out there that are trying to get into this business… you want to stay, you want to make it, there’s two things you gotta do,” Comarcho said. So what are they? Well, Comarcho said it’s simple — keep your mouth and your legs shut. #RealTalk

When talking about some of her favorite comics, Comarcho mentioned J. Anthony Brown, Katt Williams, Mike Epps and pretty much all the men that we love in this industry. “I can sit and watch them every night and laugh every night,’ cause its so funny to me,” she said proudly.

Although Comarcho said she loves her fellow sisters in the industry, she does admit that sometimes they can be a bit vulgar. She expressed that she tries to refrain from using the “B-word” as much as possible because she doesn’t see it as a term of endearment, but overall loves people like Sommore and Lunnell.

Adding to her accomplishments, Comarcho just wrote, directed and starred in her new film, “Boosters,” that is expected to be released in 2017, so be on the lookout!

To see more top comics like these ladies, check out Laughter and Liberations every Wednesday at Dolce Ultra Lounge and Bistro, located at 18039 FM 529 Ste. A in Cypress, Texas.

For more information, reservations and tickets, check out dolcehouston.com.

Check out photos from the event! [Click first image to launch the slideshow]