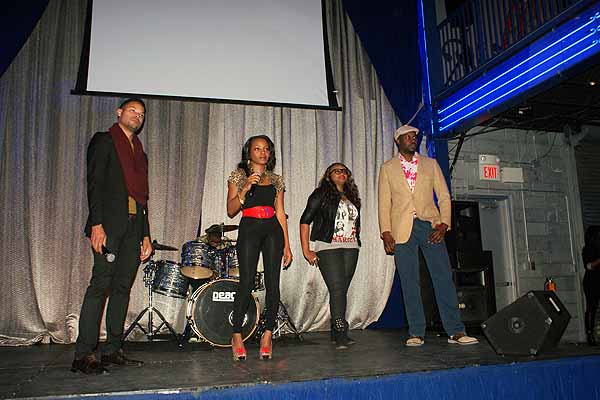 HOUSTON—Some of Houston’s most talented hopefuls found themselves in the hot seat –or on the hot stage—to be judged by entertainment mogul and star maker Mathew Knowles at the ICE Artist Showcase at the House of Dereon.

Singers, rappers, comedians and poets had the chance to showcase their talents live in front of a packed house, then received feedback from Knowles and other top industry executives.

And if you think American Idol’s Simon Cowell was direct, the man who helped Destiny’s Child rise to the top proved to be upfront, blunt and gave criticism –albeit constructive—with a no-nonsense approach and without hesitation.

After Queensley Felix, star of the OWN reality show “Houston Beauty” performed, Knowles silenced the audience’s applause and got straight to the matter at hand.  He wondered why she was singing for them, when the focus of her television show was centered around “hair and makeup.”

“Music is my first love,” Felix answered.  “I’ve been singing since I was three.”

Knowles still let it be known that there were no stars –yet—in the showcase and all would be judged without favoritism.  He then softened, and complimented her on her beautiful voice and gave her advice on going forward with music.

There was no shortage of talent in the room that evening as Felix and the other artists were judged on presentation, delivery, music selection, creativity and overall style.

“This showcase was developed to help artists hone their craft, network with experienced representatives and receive helpful information to ultimately take them to the next level,” said Ashley Brooks, founder and creator of ICE Artistry.  “I lived in Atlanta where artist showcases are popular and produce many new talented artists.  Once I moved to Houston, I knew that it was time to give the talented individuals of this city an opportunity to move forward and have a place to work together.”

Brooks then linked with Knowles and got moving forward with finding some local talent.

We caught up with Knowles after the show to talk about the performers that night, his future in the industry and fatherhood.

Cooper:  So when it comes to finding the “next big act,” what are you looking for?

Knowles:  First of all you never know if it is the next big act because unfortunately there is a lot of trial and error, but we are looking for imaging, vocals, stage presence, passion and work ethics.  Those are all the things we are looking at.  It is not just one aspect to it, this is entertainment.

Cooper: So did you see anyone tonight that you wanted to “lean in” closer to?

Knowles:  Well, we saw several people that we have an interest in.  I want to see them improve and grow, I’m not going to make an initial quick decision, but I did see some young artists tonight that I was really impressed by because we are in a business that is young.  Occasionally there’s an opportunity for an adult artist, but we are looking for that young artist that can be the next “IT” factor.

Cooper:  How long do you plan on being at the helm of Music World?  You’ve been in this industry a long time.  Any plans of slowing down?

Knowles:  You know, Solange has always said she is going to take my job and I believe her.  Solange just started her own label down in New Orleans and I am so proud.  Solange just recently got appointed the Art and Creative Director of Puma Shoes at age 27; that is significant.

Cooper:  You have these two dynamic daughters, Beyonce and Solange, who are both very talented but are going different avenues in the entertainment industry.  As a parent, how do you allow them to be themselves and not try to drag them in one direction?

Knowles:  I’ve never done that.  I always use the example that if one of my kids say “Hey dad, I want to be a doctor,” then I would try to buy a hospital.  It had nothing to do with music, I just think that the role of a parent is to pay attention to what their child’s passion is, not what we think it should be, but what is “organically” their passion and then help them with the tools to be good at it.

And when it is all said and done, “Papa Knowles” is bringing that same notion when deciding who is going to be the next artist on his label.  When the series of showcases are complete, the “chosen winner” will receive a single deal with Music World Entertainment.