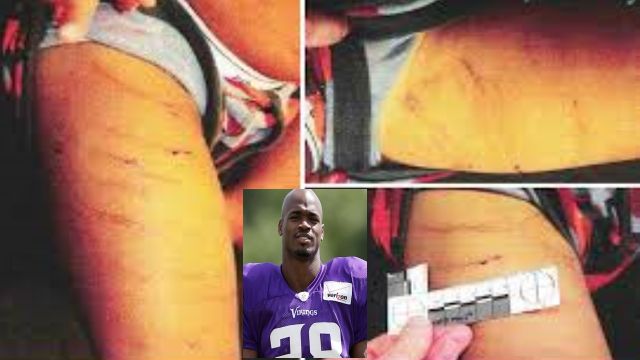 A major hotel chain has chosen to suspend its ties with the Minnesota Vikings after the team’s star running back was accused of child abuse.

It’s the latest development in the controversial case against Adrian Peterson, who came under fire after spanking his 4-year-old son with a switch.

A switch is a tree branch, and the instrument left visible scars on the boy’s thighs, lower back, buttocks and hand. The spanking came after the boy pushed another sibling off of a motorbike video game, reports say. His mother took him to the doctor after returning home from a visit with his father, and authorities were called.

Peterson was indicted for reckless negligent injury to a child. He turned himself in to the Montgomery County Jail on Friday, and was released 30 minutes later after posting a $15,000 bond.

Peterson hired famed Houston attorney Rusty Hardin, who says Peterson’s disciplining method is a reflection of the way he was reared. Hardin issued a statement saying his client’s form of discipline is similar to what Peterson endured as a young boy growing up in Palestine, Texas.

Despite their defense, photos of the little boy’s injuries after the whipping set off “to spank or not to spank” debates around the country, questioning what is excessive punishment.

After the abuse allegations made national headlines, the Vikings benched Peterson, moving swiftly after the NFL was heavily scrutinized for the way the organization handled the Ray Rice domestic violence case. But just as quickly as he was removed, the owners chose to reinstate Peterson three days later after “careful thought and consideration.”

The Vikings owners said they wanted to let the legal process play out before making any more definitive decisions on Peterson’s future with the team. That decision was made just one day after the Vikings suffered an embarrassing 30-7 loss against the New England Patriots.

The Vikings general manager Rick Spielman addressed the allegations and the team’s decision during a press conference on Monday. He spoke while standing in front of a backdrop that prominently featured the Radisson hotel logo. Well, shortly after the brand was associated with the controversy, the Radisson decided it was time to temporarily part ways.

“Radisson takes this matter very seriously particularly in light of our long-standing commitment to the protection of children. We are closely following the situation and effective immediately, Radisson is suspending its limited sponsorships of the Minnesota Vikings while we evaluate the fact and circumstances,” a statement posted on the company’s website read.

“My attorney has asked me not to discuss the facts of my pending case. I hope you can respect that request and help me honor it. I very much want the public to hear from me but I understand that it is not appropriate to talk about the facts in detail at this time. Nevertheless, I want everyone to understand how sorry I feel about the hurt I have brought to my child.

I never wanted to be a distraction to the Vikings organization, the Minnesota community or to my teammates. I never imagined being in a position where the world is judging my parenting skills or calling me a child abuser because of the discipline I administered to my son.

I voluntarily appeared before the grand jury several weeks ago to answer any and all questions they had. Before my grand jury appearance, I was interviewed by two different police agencies without an attorney. In each of these interviews I have said the same thing, and that is that I never ever intended to harm my son. I will say the same thing once I have my day in court.

I have to live with the fact that when I disciplined my son the way I was disciplined as a child, I caused an injury that I never intended or thought would happen. I know that many people disagree with the way I disciplined my child. I also understand after meeting with a psychologist that there are other alternative ways of disciplining a child that may be more appropriate.

I have learned a lot and have had to reevaluate how I discipline my son going forward. But deep in my heart I have always believed I could have been one of those kids that was lost in the streets without the discipline instilled in me by my parents and other relatives. I have always believed that the way my parents disciplined me has a great deal to do with the success I have enjoyed as a man. I love my son and I will continue to become a better parent and learn from any mistakes I ever make.

I am not a perfect son. I am not a perfect husband. I am not a perfect parent, but I am, without a doubt, not a child abuser. I am someone that disciplined his child and did not intend to cause him any injury. No one can understand the hurt that I feel for my son and for the harm I caused him. My goal is always to teach my son right from wrong and that’s what I tried to do that day.

I accept the fact that people feel very strongly about this issue and what they think about my conduct. Regardless of what others think, however, I love my son very much and I will continue to try to become a better father and person.”

Peterson faces up to two years in prison and a $10,000 fine if found guilty.