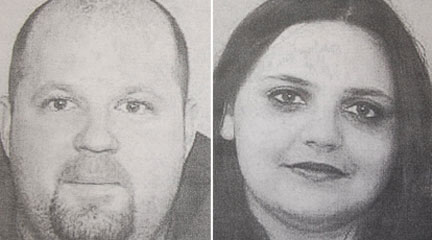 N.W.A. EditorOctober 4, 2011
0 Comments 0
Shares
Scranton police are searching for a couple accused of committing heinous acts of child abuse against a 7-year-old boy. The child was found wearing a dirty diaper and locked in the basement of a condemned home in northeastern Pennsylvania, according to the Scranton Times-Tribune.
Brian Sleboda, 31, and Lori Gardner, 26, were charged with child endangerment and unlawful restraint Friday.
Neighbors heard a child crying at a home, located at 823 Raines Street, on September 26. They called police, who then entered the ramshackle dwelling and made the shocking discovery.
The child was found in deplorable conditions and described to investigators how Slebolda and Gardner would lock him up. The basement was nearly pitch black, illuminated only by a “Camel Exotic Blends” sign hung on a wall. In one corner, flies and ticks swarmed around a broken toilet.

“Are you here to help me?” the frightened child asked as he hugged one officer.
“I am hungry and I didn’t get dinner yet,” he told another.
According to court documents, the child led investigators to the basement coffin, and told them Mr. Sleboda “put him in there” last Monday and locked it.
This time he was able to break out by pushing on the coffin, but told investigators sometimes Sleboda used duct tape to bind the it shut. The child was also told that ghosts lived in the basement and would harm him.

The boy’s relationship to the couple was unclear.

“It’s a very sad case,” Chief Dan Duffy said. “That’s pretty much all I can say.”