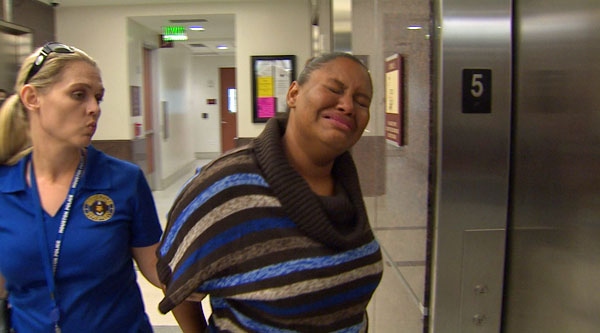 Mom accused of burning baby breaks down at courthouse

****When you know better, you do better….wrtiting stories like this is hard, but being the actual person(s) involved in the situation is even harder.  I will continue to spotlight them until change comes around.  Bless the children, bless the families****

HOUSTON — A Houston mother facing felony charges after her little boy was burned had a meltdown Thursday in the halls of a Harris County courthouse as she was being led away in handcuffs.

Authorities said Breanna Sauls, 20, put her 3-year-old son in a bathtub of scalding hot water, severely burning him, but did not take him to the hospital until several days later.

Click here to see the heartbreaking RAW video of the mom on KHOU.com

An attorney for the child said the injuries were horrific.

“The child was burned severely. Some of the worst injuries I’ve ever seen in my life,” said Atty. Michael Craig.

Sauls said on May 8 her son was sitting on the toilet while she was preparing his bathwater. She left the boy in the bathroom and ran into the kitchen because her food was burning, according to court documents.

She said while she was in the kitchen someone knocked on the door and she went to answer it. After that, she went back to her smoky kitchen. That is when she heard her son scream and ran back into the bathroom.

Sauls said her son was coming out of the water and his legs were blistering up. Being a medical student, she thought she could treat his injuries and looked in her textbook to find out what to do. She said she cleaned the burns and applied burn cream to his injuries two to three times a day. She also gave him Tylenol for the pain.

Sauls said she instructed her boyfriend on how to treat the injuries while she was away.

The boyfriend said he told the mom she should take her son to the hospital, but she would not listen. He said, in fact, they argued over him telling her to do so.

By the time she decided to take the child to Memorial Hermann Hospital, his injuries were so bad he had to be rushed to specialists. The child was transported to Shriners Burn Hospital for treatment.

Doctors said the boy suffered third-degree burns to his legs and buttocks, with additional burns on his testicles and penis. Gangrene and necrosis (dead flesh) formation had already begun to set in. He also had multiple abscesses of unknown duration.

“The delay and failure to seek immediate treatment for these severe burns is consistent with child medical neglect,” a doctor concluded, adding that the burns were not consistent with an accidental injury.

Investigators said the injuries were more consistent with what the boy said happened.

The child told an interviewer at the Children’s Advocacy Center that his mother placed him in the water. Doctors agreed he would not have been burned in that manner by stepping in on his own.

When investigators asked why she did not seek treatment sooner, Sauls allegedly said she thought her son was faking and only wanted attention. She also told them she did not want to get behind on her assignments at school.